The literary style is consistent throughout the entire text, researchers say.

A computer may have helped solve one of the most heated debates in human literature: the authorship of Beowulf. 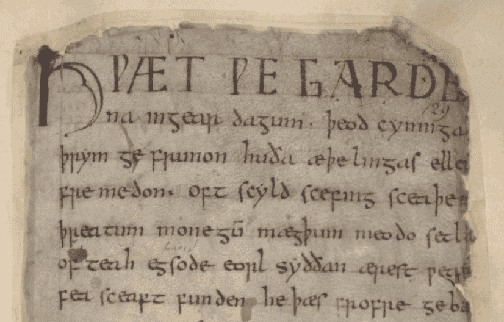 “Beowulf” is an epic poem and without a doubt one of the most important literary works in Old English literature. The date of composition is not exactly clear, but scholars estimated that it was written sometime between 975 and 1025 by an anonymous Anglo-Saxon poet. But many have argued that given its complexity and style, ‘Beowulf’ must have been strung together from multiple sources by multiple authors. In order to settle that ancient debate, researchers used a very modern device: a computer.

The new study was led by Madison Krieger, a postdoctoral fellow at the Program for Evolutionary Dynamics at Harvard University, and Joseph Dexter from Dartmouth College. They used a statistical approach known as stylometry, which is essentially the statistical analysis of variations in style. Stylometry analyzes everything from the poem’s meter to the number of times various combinations of letters show up in the text. Using this approach, the team found conclusive evidence of single authorship.

Throughout the over 3,000 lines, a consistent, unitary style is used. There are no significant stylistic changes across the text.

“We looked at four broad categories of items in the text,” Krieger said. “Each line has a meter, and many lines have what we call a sense pause, which is a small pause between clauses and sentences similar to the pauses we typically mark with punctuation in modern English. We also looked at aspects of word choice.”

Professor Leonard Neidorf of Nanjing University, an expert on “Beowulf” who was also an author of the study, agreed with the findings. Neidorf, however, isn’t the first expert to support the idea of a single author.

In the 19th century, the overwhelming majority of literary scholars believed that the poem had multiple authors. From the very first official edition, the multiple breaks in the text were obvious and suggested that there were multiple authors and multiple stories pieced together.

“The first edition that was widely available to the public was published in 1815, and the unity of the work was almost immediately attacked,” Krieger said. “From high school, everyone remembers the battle with Grendel and Grendel’s mother, and maybe the dragon, but if you go back and read the whole poem, there are weird sections about, for instance, how good Beowulf is at swimming, and other sections that go back hundreds of years and talk about hero kings that have ostensibly nothing to do with the story. So the way we read it now … seems very disjointed.”

But in the early 20th century, a scholar turned that idea on its head.

“Tolkien was one of the greatest champions of single authorship,” Krieger said. “He was a very prominent ‘Beowulf’ scholar, and in 1936 he wrote a landmark piece, ‘Beowulf: The Monsters and the Critics,’ that really revived the idea that it was the work of a single person.”

Tolkien considered the religious setting of when “Beowulf” was written — a period when the Anglo-Saxon world was converging to Christianity. Every single character in the opera is a pagan, even in all the digressions.

“Beowulf is from southern Sweden and goes to Denmark to help other pagan Germanic peoples fight monsters … but it’s overlaid throughout with a Christian perspective and infused with Christian language.” Computational evidence from the study supports Tolkien’s view from a new perspective. “Arguments based on the poem’s content or its author’s supposed belief system are vital, of course, but equally important are arguments based on the nitty-gritty of stylistic details. The latter also have the merit of being testable, measurable.”

While this likely won’t be the last word on the Beowulf debate, it adds another layer of evidence to support single authorship.

Going forward, there are two main directions where Krieger and colleagues want to take the study. First of all, they can use a similar approach to study other landmark works.

“Even works as well-studied as ‘The Iliad’ and ‘The Odyssey’ have yet to be analyzed using a full array of computational tools,” Krieger said. “The fine-grained features that seem to matter most have never been examined in a lot of traditions, and we’re hoping to spread these techniques that we think could change the way similar problems are approached.”

The team also believes that the stylistic analysis can reveal valuable insights about the evolution of English itself.

“This is the birth of English literature. From here we can look at what aspects of style evolved — not just grammar, but at the cultural level, what features people enjoyed, and how they changed over time.”

Lastly, this is a fantastic reminder of how ancient secrets can be uncovered with modern tools.

The study has been published in Nature Human Behavior.