The Great Barrier Reef is the  the biggest single structure made by living organisms; so vast that it can be seen from space. It hasn’t been fairing too well, however, and in the past 30 years alone its surface covered by coral has been reduced to half, as reported previously by ZME. A recent study proves that neither climate change or storms are to blame for the devastating loss, but human activity – primarily farming and extensive degradation on mainland Australia. 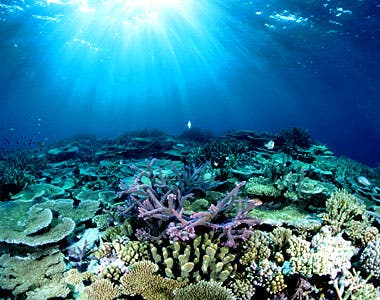 The coral began showing signs of collapse in the 1920s, coincidentally or not, right at the same time farming became incorporated as a source of food for settlers in region. This expansion went well into the 1950s, until it stabilized. Still, large amounts of fertilizer, pesticides and waste ran into rivers and streams and then into the ocean. In term, this lead to a contamination of the pristine waters off the coast of Queensland and killed the natural branching coral species, called Acropora, leaving a stunted, weedy type of coral in its place.

To prove their claims, researchers from University of Queensland drilled sediment cores, 6.5 to 16.5 feet long, from the seafloor at Pelorus Island, which is in the thick of the coral reef ecosystem. By dating the various samples they drilled, the scientists were able to reconstruct the Great Barrier Reef‘s history. Somewhere between 1920 and 1955, the Acropora stopped growing altogether and a slow-growing, spindly coral called Pavona took its place.

“Corals have always died from natural events such as floods and cyclones, but historically have shown rapid recovery following disturbance. Our results suggest that the chronic influence of European settlement on the Queensland coastline may have reduced the corals ability to bounce back from these natural disturbances”  said o-lead author, George Roff, in a press release.

Their findings are very similar to observations taken in the Caribbean, where human activities have also disrupted coral reef habitat. Now, the present study’s takeaway that human’s have been causing the Great Barrier Reef collapse might not be big news to most of you, but not only do the findings suggest humans have been damaging reefs far longer than previously thought, it also provides proof that the local authorities can not ignore. The authors propose a simple, in theory, and straightforward solution:reduce polluted runoff into the ocean.

Findings were published in the journal Proceedings of the Royal Society B.