The Seven Wonders (of the Ancient World) – with pics

by Mihai Andrei
in Discoveries, Geology, Home science
A A

Seven was considered a magic number by the ancient Greeks. So when it came to naming the most impressive constructions mankind had achieved at the time, it was a must that they settle on just seven. The historian Herodotus and the architect Callimachus of Cyrene made these lists, but their writing remained only as references. Long after that, people would begin making lists of 7 medieval or modern wonders, but I’ll write about that a bit later (stay tuned for those). So without further ado, here they are, in no specific order: 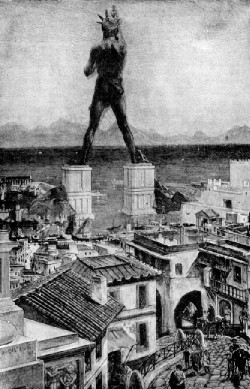 Image by wikipedia. Keep in mind that due to the fact that these structures are no longer, drawings is the best you can get
Status: destroyed
A bronze statue of the sun god Helios standing 105 feet high at the mouth of Rhodes harbor would probably catch your eyes, right? Erected between 292 and 280 BC, it lasted until it hit by an earthquake in 226 BC. The statue’s knees snapped, and the mighty god fell down to the ground. Still, the remains were so impressive that many people used to travel there to see them. The design and appearance of the Statue of Liberty are based on what the Colossus was thought by engineers to have looked like. It inspired even Shakespeare, who alluded:
Why man, he doth bestride the narrow world
Like a Colossus, and we petty men
Walk under his huge legs and peep about
To find ourselves dishonorable graves

Statue of Zeus at Olympia 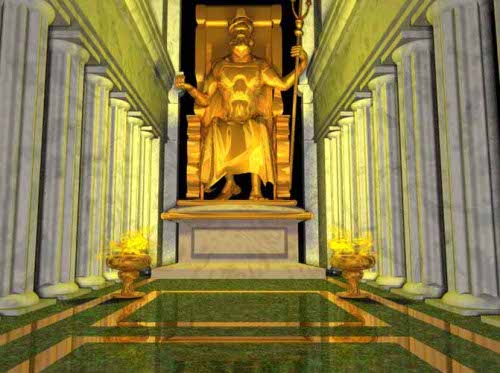 Status: destroyed
The ancient Greeks were amazing. What could be more imposing than a 40 feet high gold imposing figure of the supreme god? Well, actually it was made of wood and just covered with gold and ivory, but still, the amount of craftmanship is astonishing. It was made by the famed classical sculptor Phidias, who is believed to be the greatest of all Classical sculptors. It’s still unsure how it was destroyed: some believe that it perished with the temple in the 5th century AD, others argue that it was carried off to Constantinople, where it was destroyed in the great fire of the Lauseion. Still, what’s more is how Phidias was inspired to build this. People asked whether he had climbed Mount Olympus to see the god, or if Zeus came down to see him. He simply replied that he created him from Homer´s Iliad:
He spoke, the son of Kronos, and nodded his head with the dark brows,
and the immortally anointed hair of the great god
swept from his divine head, and all Olympos was shaken.

Status: destroyed
The Greeks weren’t the only ones who created amazing things. The babylonian king Nebuchadnezzar II created this gardens in a romantic gesture for his wife, Amytis of Media, who longed for the trees and fragrant plants of her homeland. Despite the fact that they were destroyed, they still remain a symbol of beauty for people throughout the world. 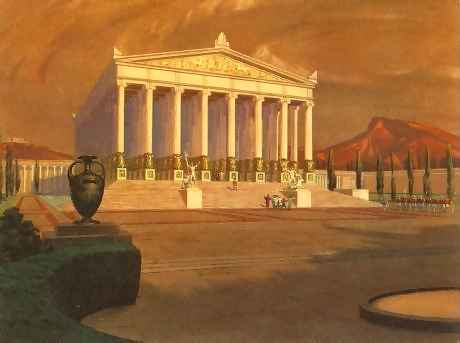 Status: destroyed
Ah, and we’re back to the Greeks. But when you’re building something for a goddess that was as beauty and as important as Artemis, you really have to be careful and make something impressive. It took 120 years to be constructed, but sadly, nothing remains of the temple today. Built of marble in the 6th century B.C. in honor of the Greek virgin, it was rebuilt almost 2 centuries later. The temple of Artemis at Ephesus was destroyed on July 21, 356 BC in an act of arson committed by Herostratus. As the legend says, he destroyed it just for fame, hence the name. 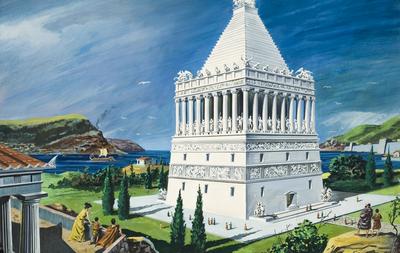 Status: destroyed
Not only gods had amazing structures built for them. This mausoleum (a lavish type of tomb) was built for Mausolus, a satrap in the Persian Empire, and Artemisia II of Caria, his wife and sister. It stood approximately 45 metres and it was decorated with beautiful sculptural reliefs created by the four greatest sculptors at the time. The result was so aesthetic that it just had to be a part of the Seven Wonders of the Ancient World. 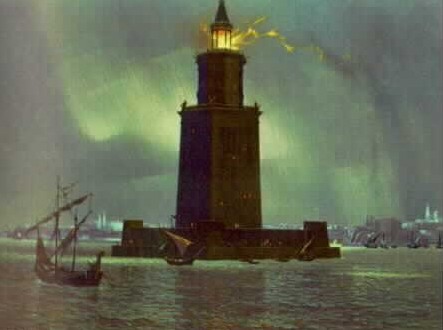 Status: destroyed
Magnificent structures weren’t just impressive: sometimes they were useful too. With a height variously estimated at between 115 ~ 150 meters (377 ~ 492 ft) it was among the tallest man-made structures on Earth for many centuries. At first, it was just a landmark of the city, but after that it became necessary. 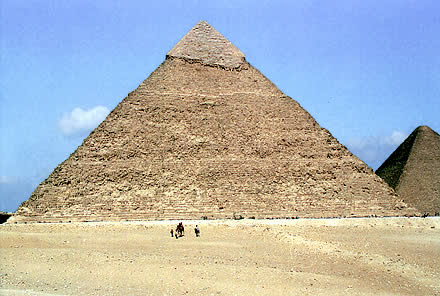 Status: still standing
Built more than 4,000 years ago, it’s the oldest of the seven wonders. However, it’s still the only one standing! It is believed the pyramid was built as a tomb for Fourth dynasty Egyptian pharaoh Khufu (Cheops in Greek) and constructed over a 20 year period concluding around 2560 BC. What’s even more impressive, it was THE tallest structure in the world for over 3800 years.