The exact path Hannibal took in this epic voyage across the Alps has been a matter of debate among scholars, but now scientists think they've finally found it by following some unlikely bread crumbs: ancient horse dung still teeming with preserved bacteria left by Hannibal's cavalry.

More than 2,000 years ago, Carthage’s greatest general, the feared Hannibal, crossed the Alps on a treacherous journey to the Italian Peninsula. The brilliant maneuver caught Rome with its pants down as no one dared think someone would be foolish enough to cross an entire army through such terrain. The exact path Hannibal took in this epic voyage across the Alps has been a matter of debate among scholars, but now scientists think they’ve finally found it by following some unlikely bread crumbs: ancient horse dung still teeming with preserved bacteria left by Hannibal’s cavalry. 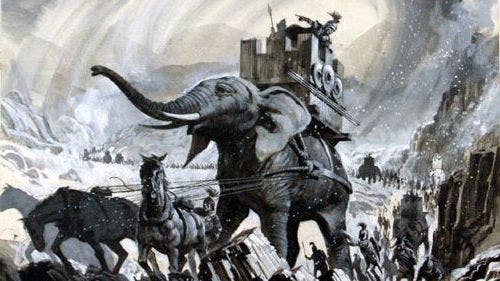 The findings were made in a site near Col de Traversette, which is 3,000 meters above sea level and very difficult to cross even with backpack, let alone a 30,000 strong army with 37 elephants and 15,000 horses, as historians account. This path was first proposed as Hannibal’s preferred route almost a century ago by  Sir Gavin de Beer, but other scholars dismissed it since there were other paths through the Alps that were much easier to cross like the Col du Clapier, which is further up north, but only 2,400 meters high and much less treacherous.

Writing for The Conversation, archaeologist  Chris Allen of Queens University said they were drawn to a pond at Col de Traversette after a geological expedition reported the site strangely resembled descriptions of the terrain Hannibal went through across the Alps. Digs at the site “unveiled a mass animal deposition of faecal materials” most likely from horses since 70% of the microbes were identified as belonging to the group  Clostridia, partial genetic sequencing revealed. The microbes can survive sequestrated in the soil for thousands of years.

“Much lower levels of Clostridia genes were found elsewhere at the site,” wrote Allen.

There was also evidence of horses trudging through the muck, despite few mammals venture through this passing. The dung “can be directly dated to around 200BC through carbon isotope analysis (very close to the date on historical records – 218BC),” Allen wrote.

“We may also be able to find parasite eggs – associated with gut tapeworms – still preserved in the site like tiny genetic time capsules. With this information, we hope to to shed considerable light on the presence of horses, men – and even Hannibal’s famous elephants – at the Traversette mire over 2,000 years ago.”

Allen reckons Hannibal chose to take this more difficult route in favor of more accessible options to avoid ambushes from neighboring Gaulish clans. The jury is still out though, but this is really the first tangible evidence we have of Hannibal’s crossing through the Alps apart from the historical records, the researchers reported in the  journal Archaeometry.

Though he ravaged the Italian countryside for several years and won several important battles, he was eventually defeated by the tactics of Quintus Fabius Maximus, who realized he could defeat Hannibal by attacking the one thing he could not replace–his men.  He began forcing Hannibal to fight small, costly engagements instead of direct conflicts.  These “Fabian” tactics are still used today; we know them as “wars of attrition.”  Realizing that Hannibal’s army was outrunning its supply lines quickly, Rome took countermeasures against Hannibal’s home base in Africa by sea command and stopped the flow of supplies. Hannibal quickly turned back and rushed to home defense, but suffered defeat in the Battle of Zama (202 BC).