Fearsome Dinosaurs found in Sahara, along with super croc

by Mihai Andrei
in Discoveries, Geology
Reading Time: 2 mins read
A A
Share on FacebookShare on TwitterSubmit to Reddit 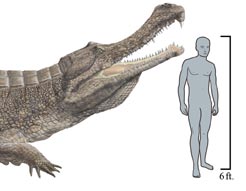 That’s right, from the sandy fields of Sahara, scientists have uncovered the bones of two new ferocious dinosaur predators, of which one kills, and the other feasts off the leftovers. The fossils belong to some previously undiscovered species that roamed the Earth about 110 million years ago during the Cretaceous Period.

One is called Eocarcharia dinops, or “fierce-eyed dawn shark.”. Um, doesn’t sounds that friendly, but (go figure) it wasn’t friendly at all.

“It was 25 feet long, certainly a terror and probably one of the top predators,” said University of Chicago paleontologist Paul Sereno, who discovered the dinosaurs.

It could rip off limbs and gash open prey with its blade-like teeth. Its glare was intimidating because of the long bony eyebrow, and it is possible that it challenged other competitors, using the brow bone to butt heads.

“You see some animals get up next to each other, get mad and smack each other, defending their territory,” Sereno said. “I think that’s probably what they were doing with that kind of brow.”

The other was Kryptops palaios, or “old hidden face”, named this way after its absolutely terrifying face. With its armored jaws and small teeth, it probably had the role of a hyena, going after carcasses. It wasn’t adapted for breaking bones, but it was about the same size as the previous specimen (with a hip height -a common measure of stature for dinosaurs- of 7 feet, which equals about 2 meters). The interesting thing is that they lived together, which is spectacular.

“That in and of itself is rather spectacular. You’ve got these multi-ton animals eating meat and living together along with a 40-foot crocodile that was also chomping on things.”

The crocodile he is referring to, called Sarcosuchus and nicknamed “SuperCroc” was about 2 times as long as the modern day crocs. Sereno and his team uncovered the fossils of the new species, along with bones from SuperCroc, on a 2000 expedition to Niger. A barren desert nowadays, Sahara used to be quite green and lush about 100 million years ago.

“It was totally different back then,” Sereno said. “It was a verdant — in part forested — flood plain. We find tree trunks, there must have been a river to support a gigantic crocodile. And it was rich in herbivores, food for carnivores.”

They may have lived in the same time as T-rex, but they didn’t cross paths, because the T-rex lived exclusively in Laurasia (what became North America and Asia), while Kryptops and Eocarcharia occupied the southern continent, Gondwana (which became South America, Africa, Antarctica, India and Australia).