World’s deepest living fish is the ghostly snailfish. It was spotted 8,178 meters down the Mariana Trench

There's a whole unexplored, almost alien-like world at the bottom of the world's deepest oceans. 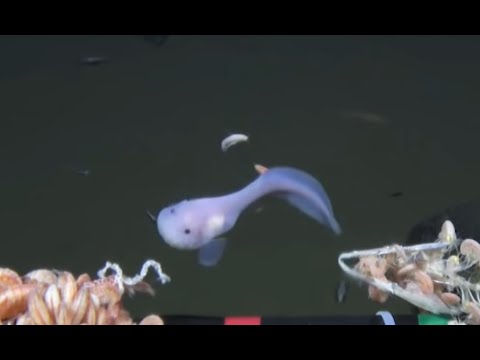 Barring a dedicated submersible, the deepest below the ocean’s surface any human has gone is 1,752 feet (534 m), a record held by French divers at the Compagnie Maritime d’Expertises. Marine creatures can be found of course far deeper than that, some even in the darkest and coldest recesses of the bottom of the ocean where light’s touch had long faded along the way.

To withstand the immense pressures found at the bottom of the ocean, fish produce a substance called osmolyte, which helps cells maintain volume and fluid balance. The fish’s body can’t produce any of this substance below 26,900 feet (8,200 meters), which is why scientists say that — theoretically at least — you won’t find fish anymore. And the ghostly-looking snailfish (Liparidae) likes to live dangerously swimming just barely above this dangerous edge.

The snailfish is officially the deepest-living fish we’ve found after researchers at the Japan Agency for Marine-Earth Science and Technology filmed multiple individuals at 4K resolution casually munching bait at 8,178 meters below a section of the Mariana Trench.

Two compact landers were sent deep below the ocean’s surface to film the whole ordeal. After three hours and 37 minutes, a bunch of snailfish came flocking at the sweet mackerel dinner. Some shrimp later joined the feast as well.

These bizarre-looking creatures with a tadpole-like tail have large heads, small eyes, and no scales, and are normally slightly larger than a human hand in length. This May 18 recording dethroned the previous record holding deepest fish sighting by about 26 meters. It will be interesting to see whether we can find fish swimming at even greater depths. Perhaps, one day, we’ll have the surprise of a lifetime by recording a fish a depths far greater than 8,200 meters operating through some exotic, almost alien-like biology.

In the meantime, this sighting gives to show how deep trench communities are much more active and interesting than previously thought.