We’re all biased, it’s hardwired in our brain. Here’s how:

by livia rusu
in Science

A cognitive bias is the common tendency of thinking in a certain irrational way – it’s a deviation from good judgement; they’re often studied in psychology and economics because of the influence that a counter-intuitive thinking process can have in these particular fields, and they significantly affect our lives. Among the researchers there have been countless controversies as to whether the cognitive biases represent utterly irrational attitudes and behaviors or they are sometimes useful as a social coping mechanism, especially in psychology. Without being stereotypical, there are certain biases that apply socially to an extended range of situations of both economic and psychological nature, among which here is a list of the most essential ones.

Here are some of the most common biases – which ones are you guilty of?

Ambiguity effect – It affects the decision-making process and consists of a decision made when there is a lack of information or a certain ambiguity about a situation. It’s basically talking without knowing exactly what it is you’re talking about. Its effect most often implies that people make a decision on basis of the known probabilities of favorable outcomes instead of on basis of the unknown probabilities of a favorable outcome. The most common scientific explanation for this bias is the fact that people tend to have a rule of thumb to avoid the options where pieces of information are missing.

Focalism – It affects the decision-making process and describes the general tendency of weighing/anchoring too much on the first piece of information they come in contact with  and all the other judgments are made by comparison to the initial information. The technique is used especially in fields involving negotiations, where all the other options will seem reasonable compared to the first one that was proposed.

Availability heuristic – It affects the formation of opinion and the decision-making processes and it roughly represents a mental shortcut, leaning more on the most recent and immediate examples that pop to our mind. According to the same type of thinking, the cognitive implied stereotype is that the information we recall (which is most of the times the most recent one) has to be inherently relevant. Finally, this cognitive bias also implies that there’s a direct proportionality between how easy we remember a series of consequences of our actions and how much importance we attribute to them.

Illusory truth-effect – It affects the formation of opinion and sometimes even the decision-making process and it implies that there is a generally tendency of perceiving information as correct for simply being highly exposed to it. However, repeating something doesn’t make it true, even though it may seem that way.

Myside bias – It represents the general impulse of interpreting the information in a way which confirm our beliefs instead of giving them up. The bias most often interferes with our thinking when cognitive issues of great emotional importance are at strike. One of the most common example of myside bias is seen in very religious people.

Base rate fallacy – It is a cognitive bias which affects both opinion-making and the decision-making process, but mostly the first one. It generally refers to a type of situation in which our brain decides to ignore the general information and ignore on the specific one. For instance, being asked whether a person who listens to death metal is rather a Christian or a Satanist, people would tend to believe the latter one, although there are over 2 billion Christians and only a few thousand of satanists in the world.

Belief bias – It generally affects the manner of thinking and the way we approach a problem based on the credibility of the conclusion of a syllogism and not on basis of that conclusion being validly supported by the premises. For instance, if young people are ambitious and they also study hard, it would be a belief bias to state that the reason for which they study is that they are ambitious, since the conclusion doesn’t necessarily result from the two premises.

Choice-supportive bias – It is a cognitive issue related to the way our perspective changes related to a particular problem depending on our previous choices connected with the issue. For instance, when it comes to buying a product of a particular brand, once a person owns one it’s more likely to ignore its drawbacks and amplify its advantages, while doing the exact opposite when it comes to the rival product. The bias works as a form of psychological validation of our previous decisions.

The familiarity principle – It is called the mere exposure effect and it represents the tendency to like things more because we have repeatedly be exposed to them. This bias affects opinion making-processes and it reflects in music, social life, professional decision and pretty much every field of interest where there are more variables out of which we have been predominantly exposed to only one of them.

Selective perception – It refers to the general tendency of ignoring the stimuli that create emotional discomfort by contradicting our prior beliefs. For instance, we’re more likely to forgive something when someone very close to us did than when we have an outside perspective, as strangers, on the same behavior observed on somebody else.

Actor-observer assimmetry – The bias refers to the way in which we tend to form errors when attributing the behavior of other people. When in the situation of evaluating the same negative behavior of ourself and another person, we tend to report our behavior as being a particular situation, while in the case of another individual we see it as a general characteristic of their personality.

Dunning-Kruger effect  – Represents a social bias in which people who are highly unskilled in a certain field tend to over-evaluate their performance in such a way that they think of themselves as being true professionals. Illusory superiority is the general thinking disorder that leads to very inaccurate judgement calls. The associated thinking of this type of cognitive bias is that the individual will always tend to under-evaluate the performance of others, especially but not necessarily by comparison to his. People with an intermediate level of skill, knowledge and experience generally have a lower rate of confidence, because they know enough see that there is much more left. 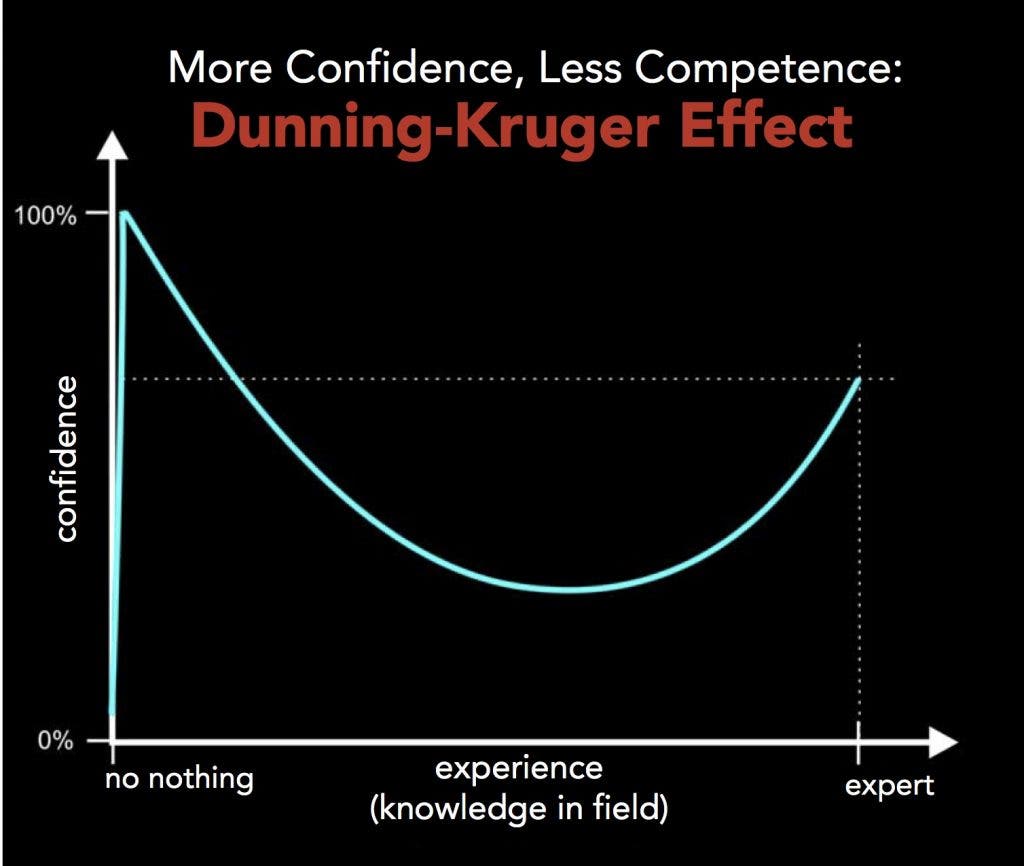 False consensus effect – In social psychology, it is often reported that the individuals believe that their way of thinking (from entire thought processes to the simplest ideas, beliefs or values) are normal. According to this type of thinking, people attribute their way of thinking to other people, often believing that it would be normal and that it most often happens for people to believe the same as they do, when in reality people have completely other opinions on the problems under discussion. This cognitive bias is highly important socially speaking, because it helps getting over the self-esteem issues and makes people believe they are normal and fit in with other people’s thinking.

The illusion of asymmetric insight – It is a social cognitive bias whereby people tend to believe that their knowledge of others is many times more meaningful and broad than other people’s knowledge of them. This illusion starts from the conviction that observed behaviors are more revealing in the case of other people than in the case of self while our private thoughts are socially presented in a very opaque manner which doesn’t let very personal things slip.