by Mihai Andrei
in Chemistry, Inventions
Reading Time: 2 mins read
A A
Share on FacebookShare on TwitterSubmit to Reddit

Think of an electric motor; what comes to mind? The results probably vary, but no one would even dare think about something 1 nanometer wide – and that’s exactly how big the world’s smallest electric motor is. 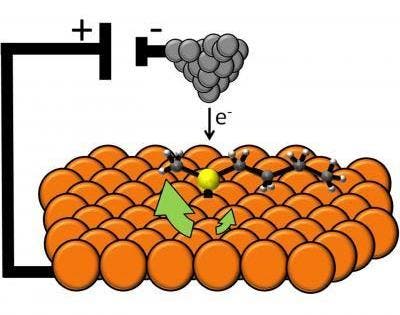 It would take 60.000 of them to reach the width of a human hair, but its importance is huge. A team of researchers from Tufts University in Massachusetts made this breakthrough possible. It could lead to a revolution in electrical circuitry, according to Charles Sykes, an associate professor of chemistry.

“We can use electricity to drive one molecule and the one sitting right next to it, say two nanometers away, remains off,” he said. This precision control comes from the use of what’s called a scanning tunneling microscope. “Instead of light, it uses electrons (to see). It has a very sharp tip, basically the sharpest needle in the world,” Sykes said.

In their experiment, they used the tip of the microscope to send an electrical current through a simple molecule — butyl methyl sulfide, which gives brandy its distinctive smell — that was placed on a copper surface (orange in the image at right), which directs the molecule to rotate one way or another.

“We can spin the thing because we have the sharp needle supplying the electricity,” he said. Left- and right-handed versions of the molecule spin clockwise and counterclockwise.

This experiment was conducted at extremely low temperatures, so what they need to do from here is make it work at normal temperatures. But that too is also feasible.

“There is nothing fundamentally preventing us from designing a different surface and a different molecule to make those energy barriers much higher so you could have some that turn on and off at room temperature, for example,” he said.