by Mihai Andrei
in Biology, Chemistry, News
Reading Time: 2 mins read
A A
Share on FacebookShare on TwitterSubmit to Reddit 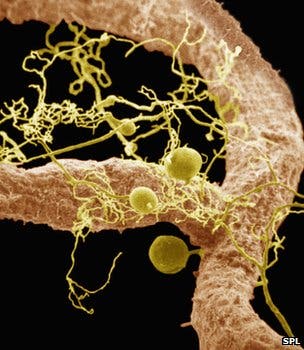 Plants can communicate with each other, signaling a potential incoming attack through an underground network of fungi, researchers found.

Instances of plants communicating with each other have already been picked up through the air – with chemicals emitted by one plant being picked up by another plant. But below ground? They rely on fungi called mycorrhizae. A new study published in Ecology Letters shows that mycorrhizae can act as communication channels, transmitting information among plants.

In order to reach this conclusion, researchers from the University of Aberdeen, the James Hutton Institute and Rothamsted Research, all in the UK, devised a clever experiment involving aphids – a group of tiny insects that feed on and damage plants. Most plants, when attacked by aphids, have surprising defense mechanisms: they either emit toxins to repel the aphids, or emit chemicals into the air attracting wasps, which feed on the aphids. They also warn other nearby plants of a potential danger.

So to avoid any airborne communication, the team sealed off the plants with bags. They grew sets of five broad bean plants, allowing three in each group to develop mycorrhizal networks, and preventing the networks’ growth in the other two. They then unleashed the aphid attack.

What they observed was that in plants which were still connected through the mycorrhizal network, even the uninfected ones started to mount their chemical defense – a sign that they were warned by the infected ones. In the ones without this network, there was no response.

“Mycorrhizal fungi need to get [products of photosynthesis] from the plant, and they have to do something for the plant,” explained John Pickett of Rothamsted Research. “In the past, we thought of them making nutrients available from the [roots and soil], but now we see another evolutionary role for them in which they pay the plant back by transmitting the signal efficiently,” he told BBC News.

Scientists were utterly surprised to see just how effective the fungi were at transmitting the signal. Aside from being a remarkable discovery, this study could have massive implications for agriculture.

“Now we’ve got a chance in a really robust manner of switching on the defence when it is needed – not straining the plant to do it all the time – and to reduce the development of resistance (of the aphids to the plants’ defences),” Prof Pickett said.