by Mihai Andrei
in Biology, Feature Post
A A

The American Museum of Natural History has released a set of postcards you can buy when you visit them – The Seashell Collector. I thought the set looks quite brilliant, and it’s definitely worth sharing, along with some basic information 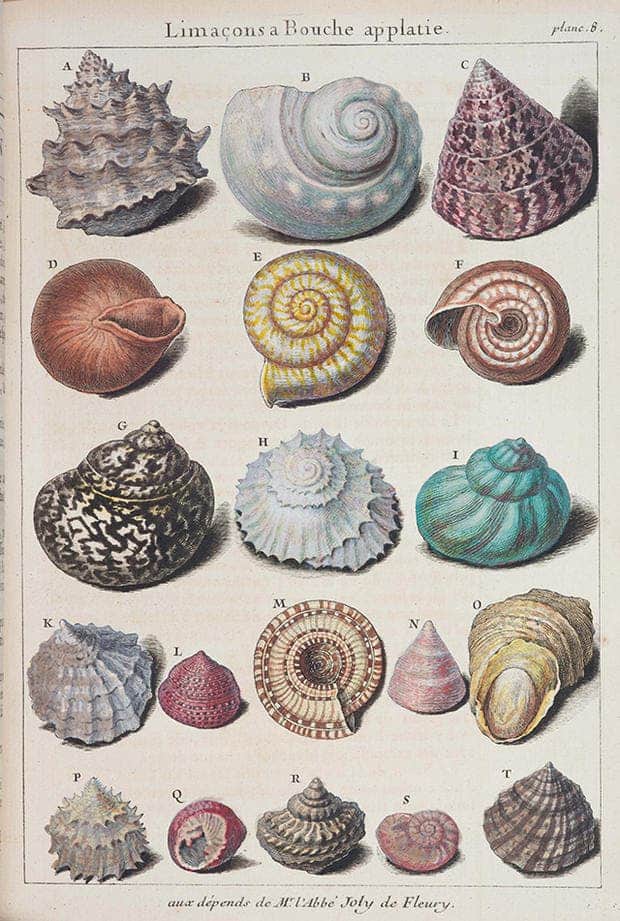 The word seashell is often used to mean only the shell of a marine mollusk – bivalves, gastropodes, etc. Seashells are the exoskeletons of mollusks such as snails, clams, oysters and many others, produced from calcium carbonate and small amounts of protein (under 2 percent). This particular illustration is over 200 years old – it appeared Le conchyliologie, or Histoire naturelle des coquilles de mer… by Antoine-Joseph Dezallier d’ Argenville and published in 1780. 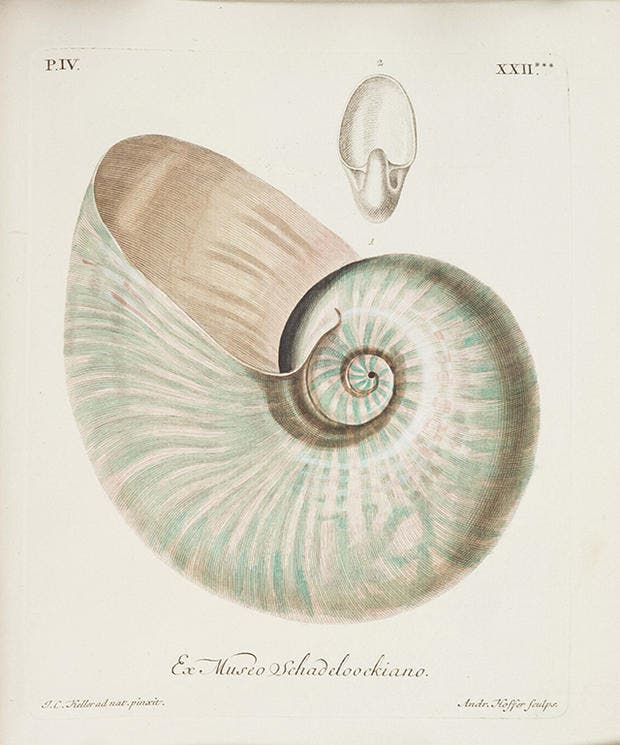 The Nautilus is a marine mollusk; some species have been around since the early Triassic, 250 million years ago, making some of the most popular fossils. But they’re still doing fine to this day. What makes them extremely special is that they approximate the logarithmic spiral almost perfectly. This image, created by engraver G.W. Knorr, appeared in the 1757 book Vergnügen der Augen und des Gemüths… (Pleasure of the Eyes and the Mind, 1757-72). 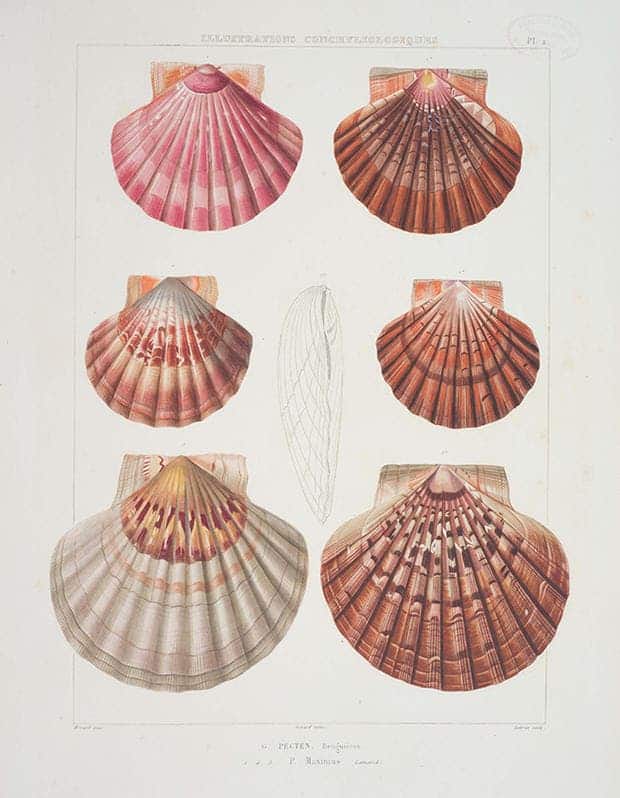 French naturalist Jean Charles Chenu published these drawings Illustrations conchyliologiques ou description et figures de toutes les coquilles, surprising the beauty and lovely colors of the great scallop. This edible saltwater clam, a marine bivalve mollusk in the family Pectinidae can be found at depths up to 800 meters in the Mediterranean sea and the Eastern Atlantic, 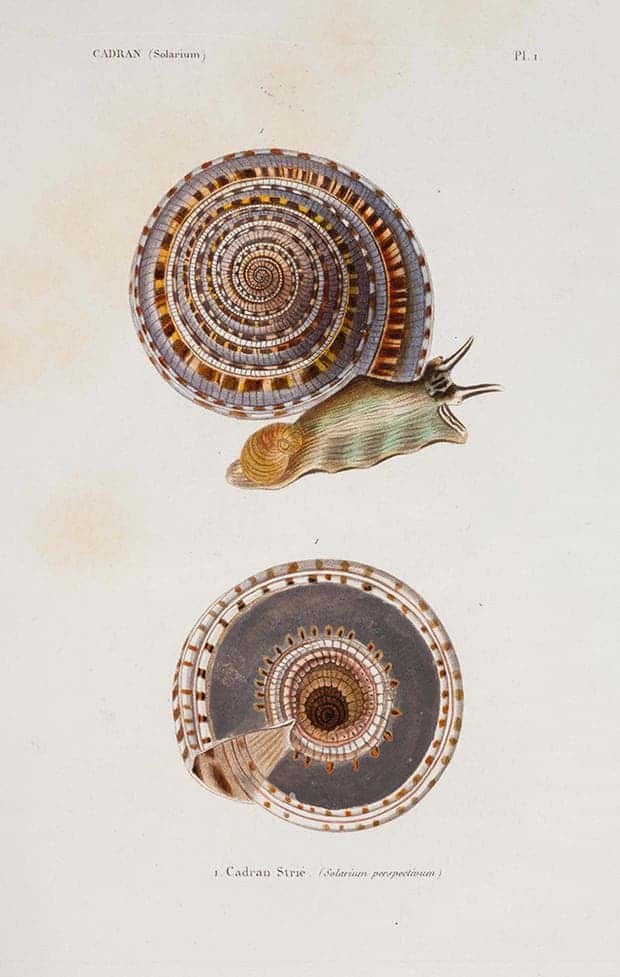 The clear sundial snail is a a marine gastropod mollusk, known as the staircase shells or sundials due to the color of their shell. This sea snail is found in sandy waters across the Indo-Pacific and these drawings first appeared in L.C. Keiner’s 12-volume series Species general et iconographie des coquilles vivantes…, published from 1834 to 1880. 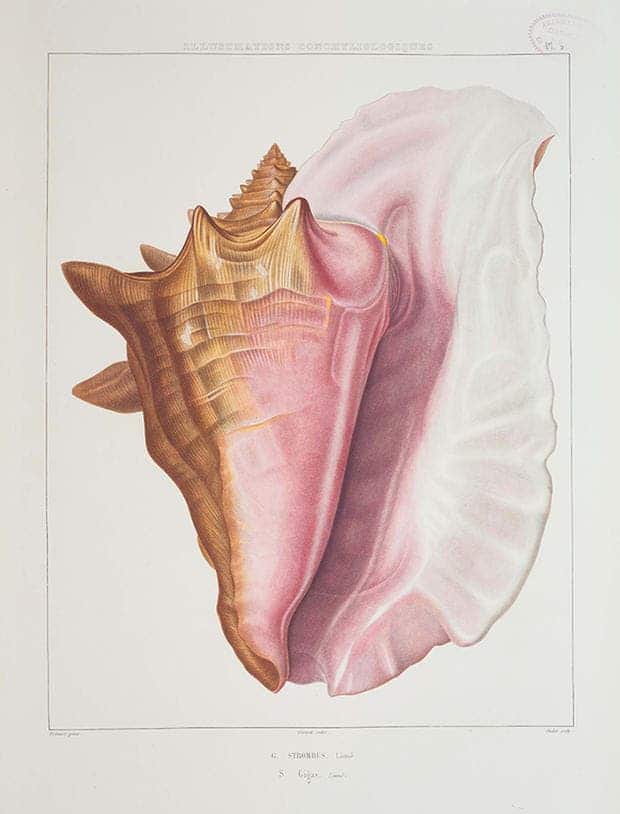 This species is one of the largest molluscs native to the Atlantic, reaching up to 35.2 centimetres (13.9 in) in shell length and weighing up to 2.2 kg (5 pounds). They can also live up to 40 years. This illustration appeared in Chenu’s Illustrations conchyliologiques ou description et figures de toutes les coquilles. 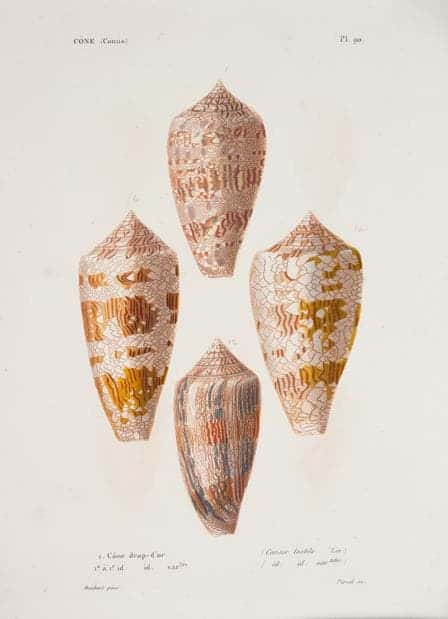 As beautiful as these seashells are, they are also very dangerous. The textile cone hunts by spearing it’s prey with a harpoon that delivers a cocktail of neurotoxins that can be fatal even to humans. Scientists are actually working to make new drugs and painkillers from their neurotoxins.