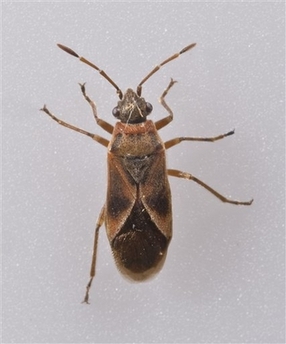 If you have a bug you want to identify and know everything about, there’s one place which will solve all your problems; the experts at the Natural History Museum in London are proud to say that they can identify species from around the globe, from birds and mammals to insects and snakes. Still, if you were to show them this particular tiny red-and-black bug showed above, they wouldn’t know what to say. What’s even more surprising is that the place you can find it in is the museum’s backyard.The bug has is about as big as a grain of rice, and was first seen in March 2007 on some of the plane trees that grow on the grounds of the 19th century museum, collections manager Max Barclay said Tuesday. Less than 3 months from that, it was the most common bug in the garden.

After that, it started showing up in other British green places, and scientists still haven’t been able to solve this issue. The museum has more than 28 million insect species in its collection but there is none that has the same characteristics as this bug. But Max Barclay, collection manager, is very cautios about calling it a new discovery, especially because the place it was found.

“I don’t expect to find a new species in the gardens of a museum,” he said. “Deep inside a tropical rainforest, yes, but not in central London.” “We waited to see if the insect would survive the British winter,” Barclay said. “It did and it’s thriving, so now we had better figure out what it is.”