by Mihai Andrei
in Biology, Feature Post
A A 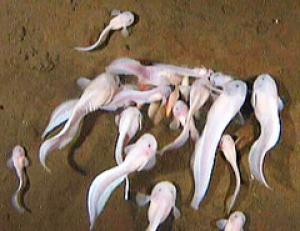 Nearly five miles below sea level, at 7700 metres to be more exact, in the Pacific oceans, scientists found fish living in the world’s deepest ocean trenches and filmed them. This is the first time a camera has been sent to such a depth.

‘We got some absolutely amazing footage from 7700 metres. More fish than we or anyone in the world would ever have thought possible at these depths,’ says project leader Dr Alan Jamieson of the University of Aberdeen’s Oceanlab, on board the Japanese research ship the Hakuho-Maru.
‘It’s incredible. These videos vastly exceed all our expectations from this research. We thought the deepest fishes would be motionless, solitary, fragile individuals eking out an existence in a food-sparse environment,’ says Professor Monty Priede, director of Oceanlab.

Of course, the fish live in an active environment.

‘But these fish aren’t loners. The images show groups that are sociable and active – possibly even families – feeding on little shrimp, yet living in one of the most extreme environments on Earth.’
‘All we’ve seen before of life at this depth have been shrivelled specimens in museums. Now we have an impression of how they move and what they do. Having seen them moving so fast, snailfish seems a complete misnomer,’ he added.

These hadal snailfish live in the deepest waters, and in this amazing environment, they have to deal with enormous water pressure, freezing temperatures and darkness. The pressure is about 8,000 tonnes per square metre, which is about the same as a man holding a few hundred elephants.