The virus that has viruses 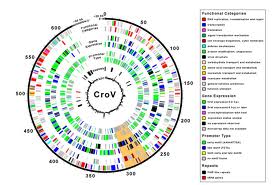 Last year, researchers reported the finding of the biggest virus yet discovered, so big that it has more DNA than some bacteria; fortunately, this big bad guy only infects a small, unicellular organism and is absolutely harmless to humans. However, the same team of researchers comes back with another discovery, that the virus itself can be infected by viruses !

CroV, as it was nicknamed by scientists, was often found in the company of a much smaller virus than itself – Mavirus (or Maverick virus). Mavirus is still bigger than most of its kind, but it’s nothing compared to CroV; what’s interesting is that it was never found living on its own, but it was active only in the company of CroV, despite the fact that it could very well enter cells on its own.

Researchers concluded that it probably steals Mavirus’ reproducing mechanism, which is consistent with the fact that CroV infections significantly slow down when the smaller virus is around.

This isn’t the first virus to get viruses of its own, there’s actually a term coined for this kind of behaviour: virophage. The good thing is that it’s quite possible that most viruses can have virophages of their own, which means that viral infections could be significantly slowed down, or even stopped, by other viruses.