Boa constrictors don’t suffocate their prey. Instead, they cut the blood from the heart

In a first of its kind experiment, biologists found out to everyone's surprise that boa constrictors kill prey by cutting the blood supply from the heart. It was long thought that suffocation is the snakes' modus operandi. This makes sense though, according to evolutionary biologists involved in the study. Cutting the blood supply kills prey much faster than limiting oxygen intake. This comes at an evolutionary advantage since this minimizes risks faced from predators.

by Tibi Puiu
in Animals, Biology, News
Reading Time: 3 mins read
A A
Share on FacebookShare on TwitterSubmit to Reddit

In a first of its kind experiment, biologists found out to everyone’s surprise that boa constrictors kill prey by cutting the blood supply from the heart. It was long thought that suffocation is the snakes’ modus operandi. This makes sense though, according to evolutionary biologists involved in the study. Cutting the blood supply kills prey much faster than limiting oxygen intake. This comes at an evolutionary advantage since this minimizes risks faced from predators.

Boa Constrictors are one of the largest snakes in the world, along with the Reticulated Python and Anaconda. Boas are non-poisonous but just as deadly. Typically, they range in lengths from 20 inches (50 cm) as neonates to 13 feet (3.9 m) as adults. Boa constrictors are found from northern Mexico to Argentina.

This snake feeds on large lizards, small or moderate-sized birds, opossums, bats, mongooses, rats, and squirrels. It is a nocturnal hunter and uses its heat-sensitive scales to locate its prey. The snake’s favorite prey, however, is bats. The boas catch the bats by hanging from the branches of trees or the mouths of caves. The snake then snatches unsuspecting bats out of the air as they fly by and kills them by constriction.

When a boa constricts its prey, it seems like the poor the animals are gasping for air. This is why the myth that boas suffocate their prey is so widespread. Dave Hardy and Scott Boback from Dickinson College noticed, however, that the prey died way too quickly. Within just a couple of seconds the animals were dead. It didn’t make any sense, since animals – including humans – can survive for up to whole minutes before passing out and eventually dying. Think of drowning people. Even after a lot of minutes being passed out, some people can be resuscitated back to consciousness. So, Hardy and Boback decided to investigate. 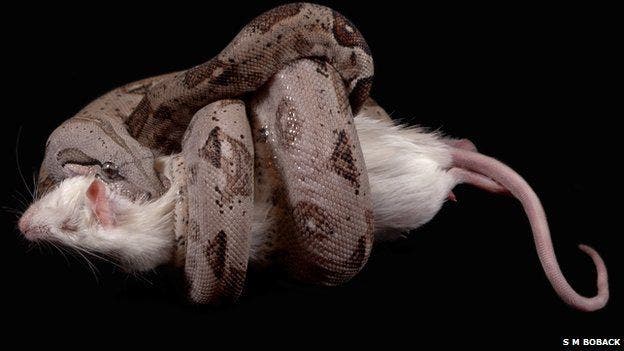 The team  anesthetized lab rats, then fitted them with all sorts of instruments that measured blood pressure, oxygen levels or the heart’s electrical activity. The rats were then fed to captive boa constrictors.

Surprisingly, the pressure a boa constrictor uses to squeeze its prey isn’t that impressive (another myth busted?). It’s just enough to cut the blood supply in your right arm. For rats, though, its more than enough. The pressure exerted upon the rat’s torso is huge – too much for the heart to beat. So, very fast critical organs like the liver, brain or the heart itself run out of blood and begin to shut down, as reported in The Company of Biologists.

“I remember being in the room and the students were looking at the data in disbelief that it happened that fast,” Boback said. “We could see the arterial pressure go down, the venous pressure go up and we could see this right when the snake was doing it .”

The researchers believe the same process is used by other constricting snakes like pythons and anacondas. It’s likely that these snakes didn’t always catch prey in this way. Rather, they evolved the blood cutting grip in time, allowing them to kill and eat prey much larger than their own bodies. It also offered an evolutionary advantage against predators or dangerous prey.

“Almost every time an anaconda takes something down, it’s putting its face on that animal,” says Paul Rosolie for National Geographic, a conservationist who has spent the last decade working with anacondas. He wasn’t involved in the new research.

“If it doesn’t get the attack exactly right, something big like a capybara can chew right through the body of an anaconda.”

Boback says the findings could prove useful in helping human patients suffering from crush injuries. “By understanding the mechanisms of how constriction kills, we gain a greater appreciation for the efficiency of this behavior and the benefit it provided early snakes,” he concludes.