A long-standing assumption in science is being put into question.

University of Michigan researchers just published a paper which, if true, should toppled the current biofuel paradigm upside down. Their study suggests that the life-long assumption in science that biofuels are inherintely carbon neutral is false. Moreover, gasoline — a fossil fuel — has lower emissions than corn-based ethanol, the study found. These findings have been met with criticism by most of the scientific community who called the methodology faulty and the authors biased.

The life cycle of a biofuel

Biofuels, as the name suggests, are generally liquid fuels derived from biomass (plants, crops, wood etc.) or animal fat using chemical processes. Unlike fossil fuels which have been produced millions of years ago and whose combustion results in a positive release of carbon into the atmosphere, biofuels are assumed to be carbon neutral, without taking into account the whole life cycle.

This intuitive approach has been used by policy makers, scientists and energy analysts for decades for the purpose of assessing the ecological and carbon footprint of biofuels, especially in relation with fossil fuels for transporation, like diesel or gasoline. Generally, these are called life-cycle analyses and what these tell us is how much carbon is being sequestrated or released into the atmosphere by a given unit of fuel, not just when you burn it, but when you make it too — the whole process, basically. 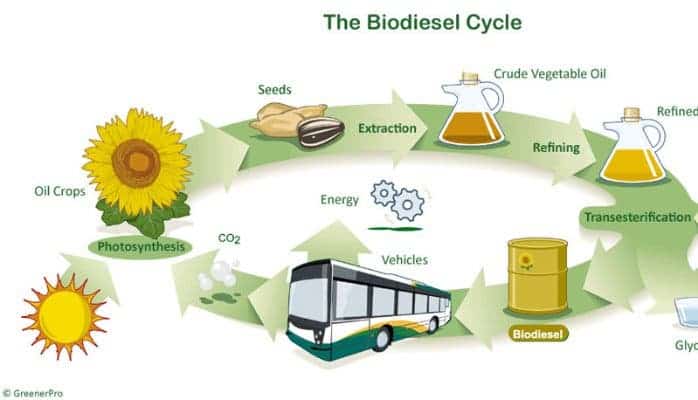 For instance, a pound of gasoline will release a predictable amount of carbon dioxide when you burn it in an internal combustion engine. But that’s only one side of the equation, the final, tail-pipe emissions. Before that, there is carbon released during oil drilling, refining, multiple transportations, packaging and so on.

The same is valid for biofuels which expend energy and hence carbon when the feedstock or biocrops are sown, fertilized, harvested, transported, chemically processed and so on. If the biofuel crop was build on an arable land which was previously used only to grow food or if a forest had to be cleared to make room for the energy crop, this too needs to be taken into consideration.

This sort of analyses are not unique and results will vary widely depending on the type of biofuel crop, location and so on, which is why so many LCAs need to be made. This is true for any kind of product, not just biofuels.

If this sounds familiar, it’s basically accounting only instead of money, we use energy and carbon.

Concerning biofuel LCAs, an integral assumption is that the tailpipe carbon released into the atmosphere was absorbed or will be by the same crops from which the biofuel was made. But University of Michigan Energy Institute research professor John DeCicco strongly disagrees.

“I’m bluntly telling the life-cycle analysis community, ‘Your method is inappropriate,’” said professor John DeCicco, who led the work. “I evaluated to what extent have we increased the rate at which the carbon dioxide is being removed from the atmosphere?”

“The question, ‘How does the overall greenhouse gas emission impact of corn ethanol compare to that of gasoline?’ does not have a scientific answer,” DeCicco said. “What I can say definitively is that, whatever the magnitude of the emissions impact is, it is unambiguously worse than petroleum gasoline.”

That’s a very bold thing to say. DeCicco says that he’s verified this long-held assumption, which no one else felt it was necessary, by analyzing what’s going on on the farmland, where all these biofuels are being grown. With the help of colleagues, DeCicco used cropland production data from the U.S. Department of Agriculture, like how much corn was farmed, over which area and what’s its chemical composition, to ultimately make a “harvest carbon” factor.

If I’m not wrong judging from his paper, DeCicco basically looked at how much biofuel crops grew by measuring the amount of carbon, then compared the carbon released by biofuel crops. His analysis suggests that over the past eight years, the increased carbon uptake by the crops only offset 37% of carbon dioxide emissions from biofuel combustion. In other words that’s 63% less carbon that was absorbed by the plants that assumed under the net zero scenario everyone uses for LCA.

So, we’ve got a pretty big discrepancy on our hands and these findings are controversial, to say the least. The fact that DeCicco’s study was funded by the American Petroleum Institute (API), which represents fossil fuel industry companies and has sued the federal government over its biofuel rules, doesn’t bode well either. DeCicco says that the API was one of the few willing to finance his research, despite he had reached out to more environmentally friendly organizations to support this analysis.

“This is the same study, same flawed methodology and same fallacious result that Professor DeCicco has churned out multiple times in the past,” said Geoff Cooper, the Renewable Fuels Association senior vice president, for the Detroit Free Press. “He has been making these arguments for years, and for years they have been rejected by climate scientists, regulatory bodies and governments around the world, and reputable life-cycle analysis experts.”

“Just like Professor DeCicco’s last study, this work was funded by the American Petroleum Institute, which obviously has a vested interest in obscuring and confusing accepted bioenergy carbon accounting practices. It’s flattering that API has taken such an interest in the climate benefits of biofuels; but the public would be better served if API spent its time and money examining and owning up to the very real — and very negative — climate impacts of petroleum.”

Argonne National Laboratory scientist Michael Wang, an expert in life cycle analyses, says the findings are questionable for a variety of different technical reasons, including the fact that DeCicco only took American farming into account. It’s thus unfair to look at CO2 released by biofuel combustion and biofuel crop carbon sequestration only, simply because CO2 being a gas is disperssed all over the world. About 29% of San Francisco’s air pollution comes from China, for instance. All of this CO2 will be absorbed by all sorts of plants, like trees, flowers, corn or sunflower crops, and so on — because plants don’t discriminate between differently sourced CO2. It’s the same chemistry for them.

“In the long run, there’s no question that biofuels displacing petroleum is a benefit,” said Daniel Schrag, a geology professor at Harvard who advises the EPA on bioenergy climate impacts. His views sharply oppose those of DeCicco. “It’s just a question of how long you have to wait.”

It’s well worth noting that biofuels themselves aren’t all that green as they’re sometimes made to sound — far from it. Biofuels displace arable land, raise food prices and in some situations they’re indeed worse than petroleum fuels, like is the case of palm oil sourced biofuels grown on land where a rain forest was torn down, for instance.

Concerning DeCicco’s study, however, he will have to come up with more convincing evidence next time.

“Professor DeCicco’s most recent, and flawed, study funded by the oil industry gives an inappropriate unearned carbon storage credit to the petroleum industry. The oil industry may have paid for the study, but they do not pay for carbon storage or carbon recycling. The biofuels industry, by comparison, does create an economic incentive to recycle carbon.

Professor DeCicco’s modeling gives fossil fuels a credit for carbon storage from existing forests and agriculture. This inclusion is wholly inappropriate in a lifecycle model because there is no economic relationship between the fossil fuel industry and agriculture or forestry. Farmers do not plant crops to soak up carbon emissions from oil use; nor do forest owners preserve forests to store carbon emissions from oil use. DeCicco inappropriately argues that all carbon in the atmosphere is the same, so biofuels are the same as or worse than petroleum fuels. But biofuels provide a direct economic incentive to farmers and foresters to manage land and recycle carbon. The oil industry creates no such incentive.

Unfortunately, DeCicco simply built a model that gives him the answer he wants. No competent life cycle assessment assumes that biofuels are carbon neutral, only that the actual carbon content of the fuels came from the atmosphere in the first place and returns to the atmosphere when it is combusted. That much is simple chemistry, and without argument. For the rest of the biofuel life cycle, the question of carbon neutrality is very much a research question, not a decided issue as DeCicco would have one believe.

The independently funded Department of Energy’s Argonne National Laboratory has demonstrated that conventional biofuels reduce greenhouse gas emissions by an average of 34 percent over their lifecycle, while advanced biofuels can reduce emissions by 100 percent or more over conventional gasoline.”