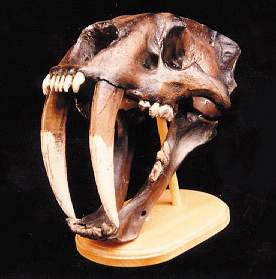 It is largely believed that the sabre-toothed cat Smilodon is a fierce, strong and very dangerous predator. Along side the Tyrannosaurus rex it is regarded as a nearly flawless killing machine. The upper canines which are built like knives support that theory.

But an Australian study, published recently in the US Proceedings of the National Academy of Science, hopes to lay the arguments to rest. The scientists at the University of New South Wales and University of Newcastle have used a very interesting technique called Finite Element Analysis (FEA) to test the bite force and feeding mechanics of the fearsome predator.

“Skulls are much more complex then most man-made structures, and to apply the technique to a fossil big cat required some tricks engineers usually have to handle,” says the University of Newcastle’s Colin McHenry, lead author on the paper. “Historically there have been a number of interpretations about how Smilodon killed,” says UNSW palaeontologist Dr Steve Wroe. “Early researchers thought it had a weak bite. More recently, people have suggested that the bite was strong.”. The results showed that the Smilodon had a relatively weak bite – about one third as powerful as a lion of similar size. “For all its reputation, Smilodon had a wimpy bite” says Dr Wroe. “It bit like a moggy.”.

So this limits the big toothed fossil cat cat to a very specific range of killing behaviours.

But just the fact that the bite was weak does not mean that it was not a formidable predator.

“Anything but,” says Dr Wroe. “Smilodon was an awesome beast — and what it lacked in bite force it more than made up for elsewhere.”. The body was very powerful and it was made for wrestling with the prey until the weak bite was applied to the neck.Dr Wroe describes the lion as a “better all rounder” in the hunting stakes. Smilodon was massively over-engineered for the purposes of taking small prey, but a ruthlessly efficient hunter of big game.”.

So even with a weaker bite than previously believed, it retains its seat among the most dangerous predators our planet has seen. Even though it is sometimes called the saber-toothed cat, or tiger, it is not related to felines at all. It was on top of the food chain, preying on a wide variety of large game including bison, tapirs, deer,  horses and ground sloths.