by Mihai Andrei
in Archaeology

Gladiators had it rough – to say the least. Their cells barely were big enough to allow them to turn around in for the time allotted them until death; usually four or five battles in the arena. 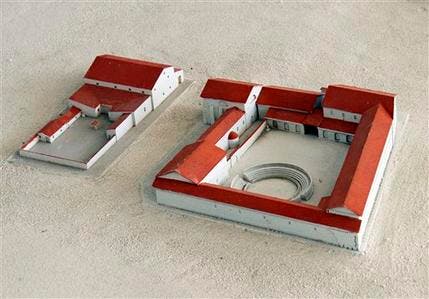 The ruins were found at the point where a Roman city fluorished 1700 years ago, being a major military center, as well as a trade outpost linking to some of the less reachable borders of the Roman empire and Asia. Mapped using a geophysical technique (ground penetrating radar), the ruins still remain underground, though the mapping was very precise and revealing.

Archaeologists claim that it rivals the infamous Ludus Magnus – the biggest gladiator school found so far in Rome, and they claim that this school has much more intact elements, including a thick wooden post found in its middle, at which young and desperate gladiators hacked away all those centuries ago.

“(This is) a world sensation, in the true meaning of the word,” said Lower Austrian provincial Governor Erwin Proell. The archaeological park Carnuntum said the ruins were “unique in the world … in their completeness and dimension.”

It was definitely a rough and tough school.

“A gladiator school was a mixture of a barracks and a prison, kind of a high-security facility,” said the Roemisch-Germanisches Zentralmuseum, one of the institutes involved in finding and evaluating the discovery. “The fighters were often convicted criminals, prisoners-of-war, and usually slaves.”

There were few perks for these men who at most, got only a few seconds of glory before their demise. They got to eat a lot of meat and take warm baths at the end of each day, but aside from that, it was training from sunrise to sunset, and fight to the death every few days. The top bonus, achieved only by a handful was, of course, freedom.

“If they were successful, they had a chance to advance to ‘superstar’ status – and maybe even achieve freedom,” said Carnuntum park head Franz Humer.