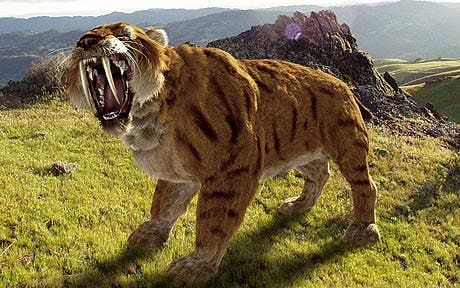 Millions of years ago, the wild savannas of Africa were teeming with carnivore wildlife, much more diverse than what we see today: lions, hyenas and other large-bodied carnivores. Paleontologist Lars Werdelin at the Swedish Museum of Natural History in Stockholm suggests the carnivore species decimation that began roughly two million years ago can be attributed to the intervention of early human ancestors that began eating meat at the time, consuming both prey and predator.

Over the past few thousands of years human intervention has led to the extinction of a number of species,  ranging from moas—giant, flightless birds that lived in New Zealand—to most lemurs in Madagascar. Plants and water creatures weren’t spared either.Where and when humans or their ancestors began to make dramatic changes to the ecosystem is a matter of debate that has remained largely unresolved.

Fossil records collected  from eastern and southern Africa, like Lothagam on the western shore of Lake Turkana in northern Kenya , reveal that some seven million years ago the plains of Africa were dominated by varied group of carnivores: sabertooth cats, strange long-legged hyenas, giant bear dogs (members of an extinct family of carnivores called Amphicyonidae), a leopard-size member of the mustelid family to which badgers belong, as well as small  carnivores related to today’s civets and mongooses also prowled there. Four million years ago, other carnivores began to surface: hyena species ancestral to the brown hyena found in southern Africa today,  modern-looking big cats, early spotted hyenas, several dog species, giant otters that have no modern counterpart, a giant civet and a variety of smaller carnivores.

After peaking around 3.5 million years ago, the number of large carnivore species declined gradually over the next million and a half years or so, mostly because the rate at which new species originated slowed down while the extinction rate held steady. Still, carnivores reigned supreme, and our flimsy ancestors,   such as Australopithecus afarensis, whose brain and body were only a bit bigger than a chimp’s,  where really no match to the great families of ancient carnivores.

Starting with  Homo erectus, the first hominin that actually resembles modern humans, things began to change. Homo erectus ate meat, congregated with peers and used tools, like sharp stones. Oddly or not, some 1.5 million years ago, corresponding to the presence of Homo erectus, carnivore species began to massively die out. Some scientists believe climate change was responsible, others like Werdelin believe early humans had the biggest part to play in this massacre. There are however somethings that don’t add up, despite the timing.

” If competition with H. erectus was to blame, then the steep decline in eastern Africa’s large carnivore species should have started well before 1.5 million years ago becauseH. erectus had emerged by nearly 1.9 million years ago. Species numbers are a blunt instrument at best for tracking the progress of an entire order of mammals over time because a reduction in numbers of one of its group can be masked by an increase in another. If two sabertooth species go extinct but are replaced by lions and leopards, the numbers will remain the same, but the community will have undergone a major change because lions and leopards can take a broader range of prey than sabertooths could,” says Werdelin.

Werdelin reasoned that a better way to measure carnivore diversity is not just to look at the number of species, but on how diverse their roles in the ecosystem are as well. The cats, for example, are highly adapted to eating meat and thus qualify as hypercarnivores. But other carnivores are omnivorous—dogs, for example, will eat a wide variety of food in addition to meat. Still others, such as raccoons, are hypocarnivores, eating very little meat and subsisting mainly on fruits and vegetables.

To visualize the  diversity of form  Werdelin and colleagues performed  a statistical analysis, thereby creating a two-dimensional plot that  he calls the morphospace. This morphospace represents the diversity of form (and inferred function) that exists within a group of related organisms, in this case the carnivores that lived in Africa over the past 3.5 million years. Plotting separate morphospaces for carnivores from distinct time intervals and comparing them offers a sense of how carnivore anatomy and eating habits shifted over time.

As reported in a paper published in the journal PLOS ONE, it appears the large carnivore families that occupy eastern Africa today represent only a fraction of the morphospace of the carnivores in the 3.5-million- to three-million-year interval, when species diversity was at its highest. According to Werdelin, these carnivores  lost nearly 99 percent of its so-called functional richness, which is to say today’s carnivores fill far fewer kinds of ecological roles than their predecessors did.  This dramatic decrease began  in the interval between two million and 1.5 million years ago, which means that the process must have started before that time—bringing the onset of this major decline in line with the origin of H. erectus.

Some researchers contest this idea, however, reasoning that H. erectus was neither numerous enough to cause these changes, nor hungry enough for meat (controversial findings).

“Like any nascent hypothesis, this one comes with a series of problems that need resolution. The most significant of these issues concerns the timing of the events described here, both in terms of when the carnivores began going downhill and when humans started to pose a competitive threat to them. We need a clearer picture of what happened and when to draw firm conclusions about cause and effect. In addition, scientists do not know whether hominins were sufficiently numerous and competitive to cause such massive change to the carnivore community,” says Werdelin.

“I hope that researchers skeptical of my hypothesis will come up with some ingenious ways of testing it. To that end, another aspect of this idea bears mention. Attempts to explain ecosystem change typically provide a bottom-up perspective, looking at how climate factors affect plants and how changes in those organisms affect the rest of the food chain up to the top predators. My hypothesis about eastern Africa’s large carnivores provides a top-down view, considering how change in the top predators could affect the primary producers at the bottom of the food chain, such as grasses and trees,” Werdelin says.