The relationship between ancient humans and Neanderthals was proven to be much more intricate than previously believed.

The relationship between ancient humans and Neanderthals was proven to be much more intricate than previously believed. It was first shown that humans interbred with Neanderthals 50,000 years ago, then 100,000 years ago, and now, a new study found that people from a Pacific Island hold substantial amounts of not only Neanderthal, but also Denisovan DNA.

Denisovans are an extinct species of human in the genus Homo. In March 2010, scientists announced the discovery of a finger bone fragment of a juvenile female who lived about 41,000 years ago, found in the remote Denisova Cave in the Altai Mountains in Siberia, a cave which has also been inhabited by Neanderthals and modern humans. DNA studies confirmed this was a new species, related to Neanderthals but ultimately different. However, while Neanderthal DNA is common in most non-African humans, Denisovan DNA is much more elusive. There is a notable exception however: the inhabitants of Melanesia, a subregion of Oceania, have between 4% and 6% Denisovan DNA.

This is curious for two reasons. First of all, it’s an isolated population on relatively inaccessible islands. Second of all, it’s really far from the Altai Mountains in Siberia, where researchers believe Denisovans stem from.

“Denisovans are the only species of archaic humans about whom we know less from fossil evidence and more from where their genes show up in modern humans,” said Joshua Akey of the University of Washington, who co-led the study.

Akey, a University of Washington professor of genome sciences, and Svante Paabo, of the Department of Evolutionary Genetics at the Max-Planck-Institute for Evolutionary Anthropology, oversaw the Melanesian genome project. The project represents a new approach at studying a human species – by studying the effect and occurrence of its genes. According to Vernot:

“Different populations of people have slightly different levels of Neanderthal ancestry, which likely means that humans repeatedly ran into Neanderthals as they spread across Europe.”

Indeed, Denisovans seemed to have quite a broad range of activity, and we can sort of map out this range by seeing where their DNA pops up.

“I think that people (and Neanderthals and Denisovans) liked to wander,” said Benjamin Vernot, a UW postdoctoral student in genomic sciences who led the project. “And yes, studies like this can help us track where they wandered.” 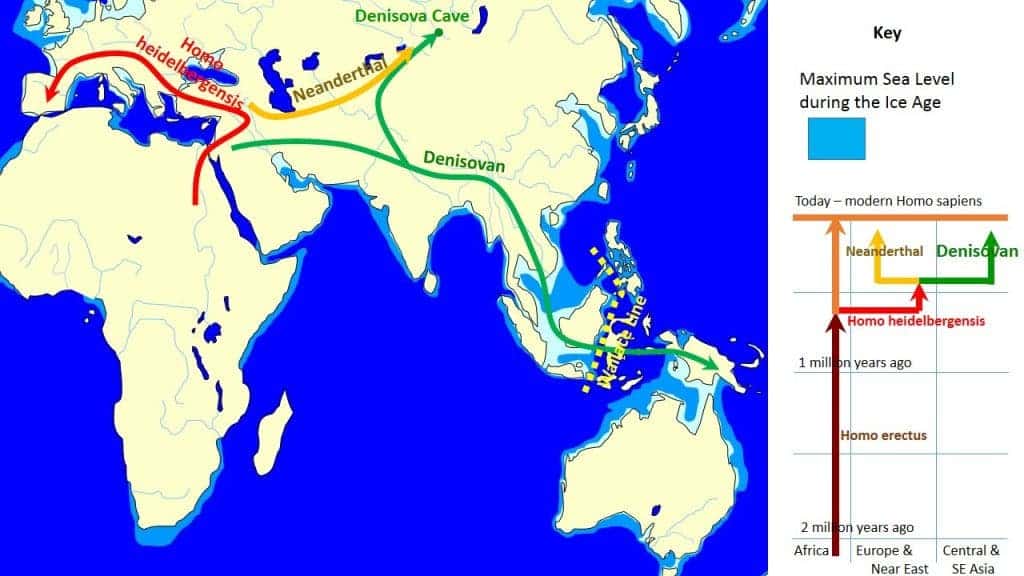 “We now know that some of those regions are also devoid of Denisovan sequences, ” he said. Vernot referred to those regions as “archaic deserts” that strengthen the argument that something there is uniquely human. The size of those regions might mean that selection against archaic sequences — or other reasons for gene depletion — was strong, maybe stronger than one might expect, Vernot said.

It’s a long and time-consuming approach and it won’t reveal the complete story but ultimately, it will tell us a lot about our own ancient history – as well as that of our evolutionary cousins.

“Some of the sequences modern humans inherited from Neanderthals and Denisovans helped our ancestors survive and reproduce,” Akey said.