Renewable flip flops: scientists produce the “No. 1” footwear in the world from algae

Walk a mile in these shoes.

by Alexandru Micu
in Green Living, Materials, News, Science
A A

Students and researchers at the University of California (UC) San Diego want to fix our plastic problem, one flip flop at a time. They’ve developed and produced the first algae-based, renewable flip flops in the world.

Their first prototypes, developed over the summer months in a York Hall chemistry lab, are pretty basic as far as flip flops go. They’re made of a flexible, spongy sole, a simple strap, and a trident logo. But between its projected cost of $3 per pair and carbon-neutral production process, they might just help change the world’s environments for the better.

Flip flops are the shoe on Earth. An estimated 3 billion of them find their way into waterways and the ocean each year, constituting a major plastic pollution source for marine environments. That’s because 3 billion petroleum-based flip flops are produced worldwide each year, eventually ending up as non-biodegradable trash in landfills, rivers, and oceans around the globe.

“These are the shoes of a fisherman and a farmer,” says Stephen Mayfield, UC San Diego professor of biology, who headed the research work alongside professor of chemistry and biochemistry Skip Pomeroy. “This is the No. 1 shoe in India, the No. 1 shoe in China and the No. 1 shoe in Africa. And, in fact, one of the largest pollutants in the ocean is polyurethane from flip flops and other shoes that have been washed or thrown into rivers and flow into the ocean.”

Two years ago, the two professors and their graduate and undergrad students developed the world’s first algae-sourced surfboard. Along with a local surfboard blank manufacturer, Arctic Foam of Oceanside, they developed a method to make algae oil hard enough to replace the polyurethane foam core in a surfboard, typically produced from petroleum. It was a big success among the surfing community, which was looking for more sustainable and eco-friendly way to construct boards.

Starting from that research, the duo wanted to expand. Surfboards were “the first obvious product to make” from algae, Mayfield says, but adds that “when you really look at the numbers you realize that making a flip flop or shoe sole like this is much more important.” Seeing the success algae-based foams enjoyed with the 500,000 or so boards sold around the world yearly, they decided to try the same approach for the billions of pairs of flip flops and other footwear that reach landfills (or worse, oceans) each year.

“Depending on how you do the chemistry, you can make hard foams or soft foams from algae oil,” Mayfield explains. “You can make algae-based, renewable surfboards, flip flops, polyurethane athletic shoes, car seats or even tires for your car.”

Mayfield and Pomeroy applied their idea, dubbed Triton Soles, for a $50,000 proof-of-concept grant. They received the funding via the Accelerating Innovations to Market program, initiated by UC San Diego’s Office of Innovation and Commercialization and paid for with the help of local elected officials through State Assembly Bill 2664. The goal of the bill is to bring more laboratory inventions from the campus to commercial development.

From research to retail 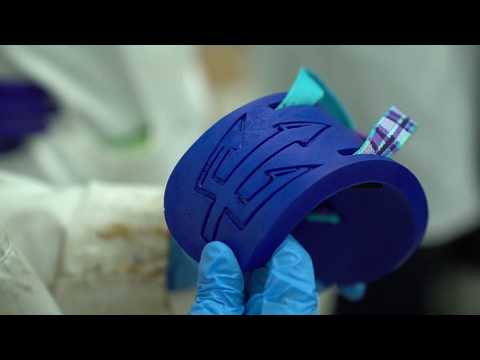 Along with Michael Burkart, a professor of chemistry and biochemistry at UC San Diego, Mayfield and Pomeroy formed a startup company called Algenesis Materials. It employs some of the students working on the flip flops, offering them much-needed practical experience in a scientific project with real-world impact.

“Part of the challenge is that typically I’d make a discovery, publish a paper and that’s sort of the end of it,” Mayfield explains. “But the best invention that you keep inside the lab really isn’t valuable for the world. And the way you make that invention valuable is to turn it into a product.”

“Teaching chemistry in the classroom is sometimes like trying to teach soccer at the chalkboard,” Pomeroy adds. “In the laboratory, students are far more engaged when they’re actually trying to solve a problem. Most people will tell you that our students are really, really bright, but they don’t always have practical experience.”

“This is a way to provide them with that.”

As Algenesis Meterials’ first product, the Triton will represent the platform on which the faculty members and students will work to refine the chemistry and manufacturing process. In time, they hope the experience will allow them to replace more petroleum-based products, such as shoe soles, car seats, or tires. The lion’s share of our oil today is, after all, originated from algae — and it is Mayfield’s hope that “anything we can make from petroleum we can ultimately make from algae.”

The Tritons — and any other polyurethane items made from algae oil — are more eco-friendly than their petroleum-based counterparts because the carbon used to manufacture them is captured from the atmosphere, not sourced from oil reserves. The team is also looking to make them biodegradable by converting the algae oil into polyurethane while allowing the carbon bonds inside the plastic to be degraded by microorganisms. The end goal is to make flip flops that “can be thrown into a compost pile and they will be eaten by microorganisms,” Mayfield says.

“If we can make these products sustainable and biodegradable, we can impact not only San Diego, but every beach community on the entire planet,” he says. “In San Diego, we have this fantastic surfing culture, many of our faculty and students are surfers, and I think all of us understand because of that connection to the ocean how important the environment is.”

They plan to have the flip flops commercially available sometime in 2018.