Can't wait for this to be turned into a TV.

by Alexandru Micu
in News, Physics, Science
Reading Time: 2 mins read
A A

Three-dimensional recordings like those carried by R2D2 in the Star Wars film are closer to reality than you’d think.

Brigham Young University (BYU) professor and holography expert Daniel Smalley has wanted to recreate the scene ever since we first saw it. And it just goes to show that dreams come true, as a paper he recently published details the method he developed to do just that.

These are the droids you are looking for

“We refer to this colloquially as the Princess Leia project,” Smalley said. “Our group has a mission to take the 3D displays of science fiction and make them real. We have created a display that can do that.”

First of all, however, Professor Smalley notes that the image of Princess Leia we know and love from the film isn’t what people think it is — it’s not a hologram. A 3D image like that, one that floats in the air and can be viewed from every angle is called a volumetric image.

The difference between them is subtle but significant. A hologram scatters light only on a (2D) surface, and if you’re not looking at that surface from the right angle you won’t see the original (3D) image. A volumetric display, on the other hand, has little scattering surfaces spread throughout a 3D space — the same space occupied by the image — so no matter how you’re looking at it, you’re are also looking at the scatters. In short, this means a volumetric image can be seen from any angle and it would still be 3D. 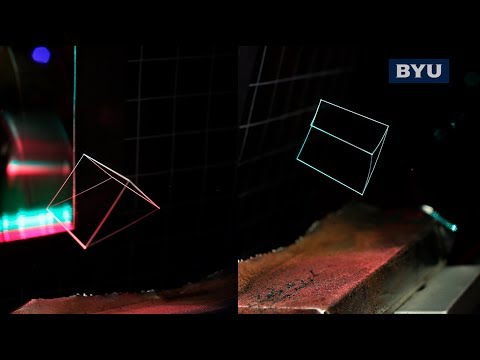 Drawing on photophoretic optical trapping, Smalley and his team devised a free-space volumetric display platform that produces full-color, aerial volumetric images with 10-micron image points by persistence of vision. Since that’s probably really confusing, here’s the team explaining how their device works without all the technical terms:

“We’re using a laser beam to trap a particle, and then we can steer the laser beam around to move the particle and create the image,” said coauthor Erich Nygaard.

“This display is like a 3D printer for light,” Smalley said. “You’re actually printing an object in space with these little particles.”

To showcase their work, the team have 3D-light-printed a butterfly, a prism, the BYU logo, rings that wrap around an arm, and an individual in a lab coat crouched in a position similar to Princess Leia as she begins her projected message. While some of the previous work at BYU have related to volumetric imagery, Smalley’s team is the first to successfully merge color images and optical trapping.

The paper “A photophoretic-trap volumetric display” has been published in the journal Nature.