by Alexandru Micu
in Books, Reviews
Reading Time: 5 mins read
A A
Share on FacebookShare on TwitterSubmit to Reddit 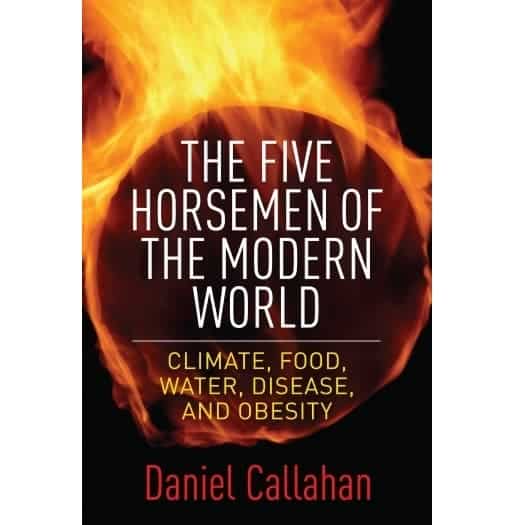 The original four horsemen of the Bible stand for some of humanity’s oldest fears — war and conquest, famine or disease, ultimately death. Each one symbolizes a deeply instinctual dread, of a kind that all life has hard-wired to avoid, literally, under pain of death.

In modern societies, these specters don’t hold as much sway as they once did. Compared to our ancestors, we have plentiful and easily accessible food sources. Science and technology supply drugs and techniques that make us live longer and better than ever before. Wars all take place on TV, with stories of “somewhere else”. We have put systems in place that largely corral these ancient evils.

But we’re not beyond their reach. In The Five Horsemen of the Modern World, american philosopher and biomedical ethicist Danial Callahan takes on these issues in the modern day. The book is divided into three sections comprising 11 chapters and focuses on five modern horsemen — climate, food, water, disease, and obesity.

Section one attempts to identify and quantify each problem in turn. Here Callahan does a superb job of presenting each issue in its fullest extent, withholding personal input in favor of hard facts. Starting with Climate, he shows that heavy exploitation of natural resources has pushed the environment to the brink of collapse. These changes, he writes, will impact all of us one way or another — yet there has been almost no reaction from politics or industry. Callahan takes a look at the role scientific misinformation, as well as political and economic interests play in the issue. In the end, we can’t rely on technological quick-fixes, he writes, but will have to re-think our and our society’s relationship to nature.

“Humans must learn how to live sustainably in harmony with nature and cease believing we can with impunity master and dominate it, and that from an environmental perspective human life on [Earth] may be crippled or even destroyed unless we become nature’s stewards.”

The chapters on Food and Obesity, although separate, treat two chilling ends of the same problem. Part of the world is dying for lack of food, while the other is dying from over-consumption. The rise of a global food market squashes local farmers under a deluge of produce. Combined with a growing fiscalization of the market, this leads to greater energy costs for transport, less food security, raising rates of malnourished and starving people, as well as a growing environmental strain. Callahan also examines the faults in today’s economic models in addressing the food problem. Price fluctuations, he writes, often leave poorer countries unable to afford basic food.

At the same time, developed countries struggle with too much food. Cheap but salt-, sugar-, and fat-rich fast-food powers growing obesity (and death) rates in these countries. Taking the example of China, he warns that an ever-growing population in developing countries will place an exponential burden on our agriculture — they demand more milk, eggs, meat, and other animal goods which require ever more farmland.

Water looks at the growing scarcity of fresh water and the alarming rate of aquifer depletion. Rampant drilling has left may areas, such as India, in risk of drying out. Callahan also details the ethical dilemmas with fiscalizing water, and the unavoidable tragedy of the commons if we don’t regulate water use.

Disease illustrates the divide between the developed world and the rest. The former suffer from bloated medical systems in which huge sums of money are spent on prolonging the life of elderly and treating chronic diseases. The latter simply lack the economic resources to do so, and attempt to focus on prevention.

In the second section, “Examining the Pathways through the Thickets”, Callahan looks at the issues which perpetuate these five problems. Is it ethical to tell people what and how much they can eat, even if you do it to prevent obesity? Is it right for the state to intervene in such personal decisions? And what is the role media and industry play in shaping these personal choices? Can we rely on technology to solve our problems? In the end, these are not simple questions and they do not have simple answers. The book gives all the sides implicated in these issues a chance to present their arguments.

The last section, “Toward the Future: Progress, Hope, and Fear” is in Callahan’s own words “a theory about how and why the five horsemen came into existence.” He points to our need for progress as the root cause of all these issues — the need to live better, and feel that we live better. Globalization of the market, affluence, and wealth inequality are what caused these problems to arise in the first hand.

The Five Horsemen of the Modern World is a work of global scope that takes into account science, politics, economy, and society when analyzing the greatest threats we face today. It dissects these extremely tangled issues in some of the clearest writing I have ever laid eyes upon. Callahan isn’t afraid to go against some of your political, economical, even ethical values at times — but it will do so with solid arguments.