by Mihai Andrei
in Books
Reading Time: 5 mins read
A A
Share on FacebookShare on TwitterSubmit to Reddit 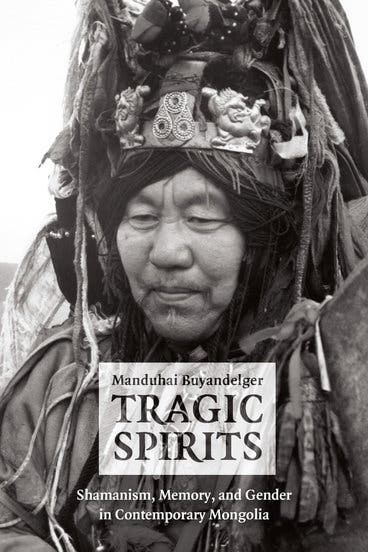 After the collapse of the USSR in 1990, Mongolia, long time a satellite of the Soviet Union, regained its independence, but found itself aimlessly lost. This period brought devastating changes to the country, as it almost forcefully went through liberalization of trade and privatization of publicly owned assets, which led to impoverishment for most of the people. This unfortunate situation, mixed with the fact that religion became official again led to a strange rise of shamanism – people linked their misfortune to ancestral spirits, who were angered by the lack of worship during the Communist period. Tragic Spirits explores these practices: a mysterious, mystical world ruled by the desire for a better tomorrow.

Mongolia is one of the least populated countries in the world – with a population of about 3 million people and a total surface area of of over 1.500.000 square kilometers, it averages less than 2 people per square kilometer. Still, the revival of shamanism has spread like wildfire throughout the country. Professor Manduhai Buyandelger from MIT conducted lengthy research, linking contemporary developments in Mongolian nationalism and culture with Buryat family experiences to document this revival. The Buryat mongols are the largest indigenous (aboriginal) group in Siberia, inhabiting Mongolia and Russia.

In the book, Buyandelger offers a comprehensive bottom up explanation on why this happens; she places the rise of shamanism in Monglia as part of a global phenomenon, very similar to what’s happening at the moment in many underdeveloped parts of the world, such as Africa and Indonesia. Starting from her own personal experiences with the shamans, she paints a very interesting and colorful picture. For someone like me, who is more familiar with the historical facts of Mongolia rather than the contemporary ones, this was an eye opener, and changed the way I see not only this country, but also some things which are happening much closer to home.

To put it bluntly, Mongolia is a very poor country. It was always poor in its modern history, but after the fall of the Soviet Union, things went from bad to worse. The return to shamanism is a response which works on many levels. First of all, during the Soviet occupation, many physical records of the past were wiped out. As the generations changed, a part of their history was simply erased; the return to shamanism was not only a way to return to their religious roots, it was also a way to reinvent their own history.

“People knew they had forgotten their past,” Buyandelger says. “So they turned to a past that was embodied by the spirits of ancestors. Instead of thinking about the past in terms of years or periods, shamanic rituals teach people to think in terms of historical personas.”

Shamans supposedly give you a chance to meet with the spirits of their distant ancestors and hear “fragmented stories about their lives in the past,” as Buyandelger observes in Tragic Spirits. Many Mongolians believe in worshipping those ancestral spirits, and they believe that if they treat them right, then the spirits will protect them – and the same thing goes for the opposite. They’ve started to believe that bad things are happening to them now because of the long period when they ignored the spirits (religion was banned during Soviet occupation). It’s an easy way for the people to justify their misfortune, and it’s way for opportunists to develop what can already be called an industry – shamanism.

Adapting to the free market and becoming involved in modern economy is a hard thing for the Buryats; it simply seems that the traits necessary for modern success or even survival are not well inscribed into their genome – and they’re also lacking the education system necessary for this.

“Without knowledge about the market economy, adequate infrastructure, legal frameworks, or start-up support,” Buyandelger observes, “neoliberal reforms undid their own goal: to make the rural nomads into property owners capable of caring for themselves. Instead of bringing the expected capital, neoliberal ‘shock therapy’ brought lingering economic devastation, which the Buryats explain as the revenge of forgotten origin spirits.”

This is why they now try to appease the “angry spirits”, in the hope of improving their condition. So one puzzling question is: do the shamans truly believe in their religious calling, do they really believe in what they’re doing, or are they simply seeing it as an entrepreneurial opportunity? That question is not answered directly – it’s for you to decide what you think. It’s clear that shamanic practices (which often include sacrifices and journeys to the spirit world) have their own economy, different to that of the Western World – but they also appear to have their own soul. But do people really believe in this practices? Is it truly a religion, with true believers, or is it a simpler way to deal with their problems?

“People don’t have genealogical records, and you have shamans who don’t know exactly how to conduct themselves, so everything is a trial,” Buyandelger says. “Shamanism proliferates today not because people necessarily believe it 100 percent, but because people are trying to test it, and find out the most authentic practices they can trust. The more skeptical people seeking out shamans, in some ways, have become the most active catalysts of this proliferation.”

All in all, this book is a cultural journey for you to immerse. It’s also one of the few anthropological books written about Mongolians, by a Mongolian. Manduhai Buyandelger received her B.A. and M.A. in Literature and Linguistics from Mongolian National University and her M.A. and Ph.D. in Anthropology from Harvard University, but from the 1990s and through the 2000s, she lived and worked side by side the Buryats – she is one of the few scholars, who can tell you, first hand, what’s going on in Mongolia.

This is a Book review of Tragic Spirits. If you have a book (or other product) that you would like us to review, send us a pitch using the contact form and we’ll get right back to you.