In a thoughtful and engaging biography of Rosalind Franklin, Brenda Maddox beautifully portrays the life of an ingenious scientist.

by Sapna Chhabra
in Books
Reading Time: 2 mins read
A A
Share on FacebookShare on TwitterSubmit to Reddit 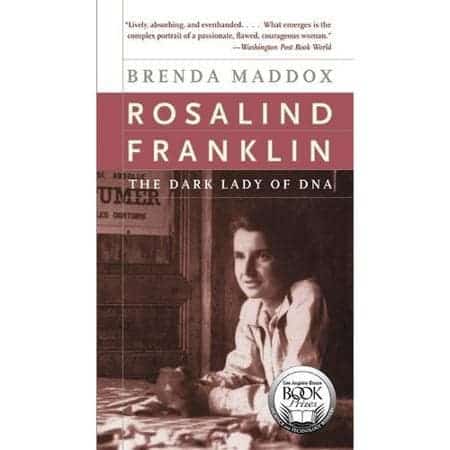 “It has not escaped our notice that the specific pairing we have postulated immediately suggests a possible copying mechanism for the genetic material.”

This celebrated statement of Watson and Crick marks a defining moment in the field of science. By the year 1952, DNA had been officially accepted as the genetic material. But one question still puzzled scientists, how did the DNA transfer genetic information on to the next generation? In 1953, James Watson and Francis Crick first described the double helix model of DNA. Having deciphered the structure of DNA, they took a step closer to unravelling one of the biggest puzzles of the 20th century. This remarkable discovery was definitely worth a Nobel and they did receive one in the year 1962.

While the above piece of history is relatively well known, there is another part of the story, which barely comes to limelight. The key to deciphering the structure of DNA lay in the famous Photograph 51. The X-Ray diffraction data that led to the remarkable discovery was the work of a PhD student, Raymond Gosling who was working under the supervision of Rosalind Franklin. Watson and Crick were shown the data by another scientist, Maurice Wilkins who went on to share the Nobel Prize with them. Not even once was Rosalind asked for permission.

While Watson, Crick and Wilkins were well acknowledged; there was another brilliant scientist behind the work who never got her due share.

In a thoughtful and engaging biography of Rosalind Franklin, Brenda Maddox beautifully portrays the life of an ingenious scientist. She offers unique insights into the civilized intellectual life of a hardworking and dedicated Rosalind, whose interests ranged from poetry and theatre to politics. As a woman, a scientist and a Jew, life was not easy for Rosalind, but her determination and passion towards science kept her going. She made significant contributions to three different areas of research. Trained as an X-ray crystallographer, she applied her experience and knowledge to uncover the details of the structure of coal, DNA and Tobacco virus. Rosalind’s life was cut short by ovarian cancer in the year 1958, when she was just 37 years old. In her book, Brenda Maddox traces beautifully the subtleties of a short but well lived life. Delving deep into the life of Rosalind, Brenda Maddox has done a great job in bringing forth an inspiring life story.

“Science and everyday life cannot and should not be separated. Science for me gives a partial explanation of life. In so far as it goes, it is based on fact, experiment and reason”