The mysterios green glow of the sea decoded

by Mara Bujor
in Biology, Chemistry, Discoveries, Research, Studies
Reading Time: 2 mins read
A A
Share on FacebookShare on TwitterSubmit to Reddit 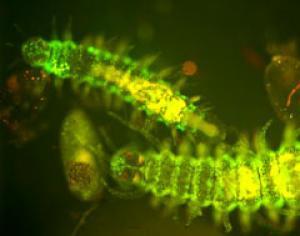 In the past the sea was considered a truly miraculous place especially as many phenomena seemed to have no logical explanation. Sea creatures have also troubled  the sailors as they were like nothing else they had ever seen. Now science proved that most of our fears are not justified, but also that miracles can have an explanation without losing their appeal.

One of these cases is the one of the green light to be seen below the ocean’s surface in tropical seas. No, no aliens to be blamed for this, but bioluminescent worms. Until recently there were still some questions to be answered, especially related to the way light is produced. At first, it was discovered that the light is highly important in  the mating ritual, but now it seems that it may also serve for protection. The biological mechanisms of the phenomenon are still to be decoded.

Keeping light stable for such a long period of time and identifying the exact protein which allows this would prove a helpful discovery for biomedical, bioengineering and other fields.

The fireworms which were studied (Odontosyllis phosphorea) live on the seafloor in tropical and sub-tropical shallow coastal areas. In summer, when mating season arrives, which is also known as swarming, females secrete a mucus that glows green before they release gametes into the water. The intense color attracts the males, which release their own gametes in the same area.

These displays of light were noticed especially n Southern California, the Caribbean and Japan, reaching the highest degree one to two days before each quarter moon phase, 30 to 40 minutes after sunset; they usually last for 20 or 30 minutes. But, as the young seem to secrete the same substance, it seems that the mucus may be used for protection as it distracts predators’ attention.

After studying hundreds of specimens, the main purpose of the researchers was to produce the luminous mucus in the laboratory. The bioluminescence proved to be active in temperatures as low as minus 20 degrees Celsius (minus 4 degrees Fahrenheit) and mostly in settings of low oxygen levels.

The scientists believe a light-producing protein, also called “photoprotein” may be involved. Further studies will be needed in order to isolate it successfully.

This work is inspired by the one of Osamu Shimamura, who won the Nobel Prize in Chemistry for discovering the fluorescent protein from the jellyfish luminescent system. So who knows what this research will lead to?