Detachable airplane cabin parachutes passengers to safety: is this a smart design?

Tatarenko Vladimir Nikolaevich, a Russian inventor, has designed an audacious new safety mechanism for airplanes: a detachable passenger and cargo cabin that springs away from the aircraft in case of emergency. Once unhooked, the cabin deploys parachutes that safely touch down the cabin on land or water.

by Tibi Puiu
in Design, News, Technology
A A

Tatarenko Vladimir Nikolaevich, a Russian inventor, has designed an audacious new safety mechanism for airplanes: a detachable passenger and cargo cabin that springs away from the aircraft in case of emergency. Once unhooked, the cabin deploys parachutes that safely touch down the cabin on land or water.

The design, which Nikolaevich drafted over three years, is supposed to detach the cabin in case of emergency anytime during take off, mid-flight or landing. The prototype also includes storage space designed to hold luggage under the cabin. This way the design not only saves lives, but belongings as well.

Is this actually necessary? The first impression would be to go to any length to save people’s lives, if the situation arises. But that’s not all that practical. Figures from the Bureau of Aircraft Accident Archives put the total number of fatalities for 2015 at 247, and despite the tragic crashes of  AirAsia flight QZ8501 and the downing of MH17 in Ukraine, both in 2014, flying is considered safer than ever. Sometimes accidents happen, but 8 million people fly each day.

That being said, would passenger agree to pay maybe twice as much for a ticket considering they’d be more likely to be killed by terrorists, lightning, food poisoning and ladders than die in a plane crash? Some might, but personally I doubt there’s that much of a market.

Also, there are structural integrity issues. A detachable cabin means that the plane won’t be made out of a single-body fuselage which might cause more serious problems than those the design hopes to avert. Then, there’s the fact that parachute doesn’t necessarily mean you’re safe. You can (gently) crash in a mountain, a city, home, whatever. It is a lot better than crashing at more than a thousand miles an hour, but far from being a complete safety solution. What about the pilots?

If you find the design just some pipeline dream, think it over. It’s not that implausible, considering Airbus — a very competitive company that takes engineering serious — has a patent for a detachable cabin. The design’s intent, however, is different. Instead of providing a safety net, the Airbus patent aims to streamline passenger boarding. More about it in the video below. 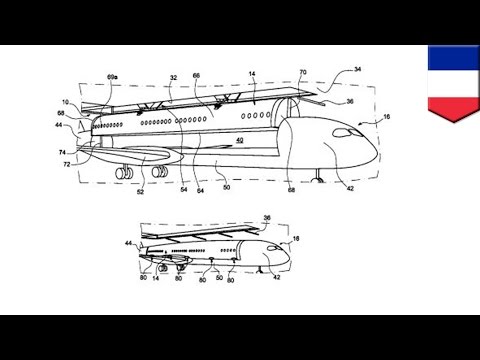 So, how about it? Would you pay more to board a plane designed by Nokolaevich?