Stanford scientists have developed the first lithium-ion batteries that run normally, shut down when they start to overheat, and then restart when the temperatures go down.

Stanford scientists have developed the first lithium-ion batteries that run normally, shut down when they start to overheat, and then restart when the temperatures go down.

Overheating batteries have the potential to become very dangerous, especially in devices like recliners and computers to navigation systems and hoverboards. Making batteries switch off in troublesome cases can save lots of property and more importantly – many lives.

“People have tried different strategies to solve the problem of accidental fires in lithium-ion batteries,” said Zhenan Bao, a professor of chemical engineering at Stanford. “We’ve designed the first battery that can be shut down and revived over repeated heating and cooling cycles without compromising performance.”

A typical lithium-ion battery is quite simple in principle: it consists of two electrodes and a liquid or gel that carries charged particles between then. Naturally, puncturing, shorting or overcharging the battery generates heat. If a critical temperature of about 300 degrees Fahrenheit (150 degrees Celsius) is reached, the electrolyte can catch fire or even explode.

Several technologies have been deployed to prevent this, but the problem is that all these technologies are non-reversible. That is, if something is done to prevent the battery from catching fire, it can’t be undone.

“Unfortunately, these techniques are irreversible, so the battery is no longer functional after it overheats,” said study co-author Cui, an associate professor of materials science and engineering and of photon science. “Clearly, in spite of the many efforts made thus far, battery safety remains an important concern and requires a new approach.”

In order to make batteries stop and go depending on heat, they used the property of dilatation – when something is hot, it expands.

“We attached the polyethylene film to one of the battery electrodes so that an electric current could flow through it,” said Chen, lead author of the study. “To conduct electricity, the spiky particles have to physically touch one another. But during thermal expansion, polyethylene stretches. That causes the particles to spread apart, making the film nonconductive so that electricity can no longer flow through the battery.” 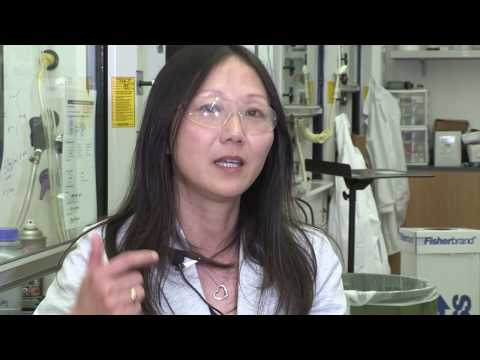 They tested their battery at 160 F (70 C) and above, and found that the film expanded like a balloon, causing the spiky particles to drift apart, shutting the battery down. But when the temperature dropped back under that temperature, the battery restarted. Depending on how they build the film and battery, the limit temperature can be changed.

“We can even tune the temperature higher or lower depending on how many particles we put in or what type of polymer materials we choose,” said Bao, who is also a professor, by courtesy, of chemistry and of materials science and engineering. “For example, we might want the battery to shut down at 50 C or 100 C.”