Why Cheetahs can outrun any other fast paced animal

by Tibi Puiu
in Animals, Studies
Reading Time: 2 mins read
A A 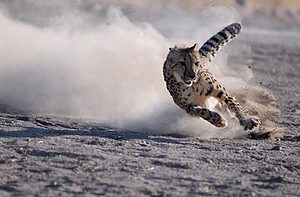 The cheetah is the Bugatti Veyron of the animal kingdom, capable of reaching speeds as high as 29m/s (65mph). Actually, in a 0 to 60 mph race, most cars would have a hard time in out-pacing the fastest land animal in the world. How does the cheetah manage to outstrip all its other animal contenders, even those which have a similar stride, like the greyhound? A new researcher from scientists at the  Royal Veterinary College, UK, have concluded that the cheetah’s secret is that it “shift gears” while running, striding more frequently at higher speeds. The sports car analogy couldn’t be more sound.

“Cheetahs and greyhounds are known to use a rotary gallop and physically they are remarkably similar, yet there is this bewitching difference in maximum speed of almost a factor of two,” said Alan Wilson from the Royal Veterinary College, UK.

To study the running behavior of cheetahs in detail, the researchers choose to follow captive cheetahs from the ZSL Whipsnade Zoo in the suburbs of London and the Ann van Dyk Cheetah Centre in South Africa. They planted force-measuring plates in the ground and had both cheetahs and grayhounds chase after a piece of chicken.

“Force plates are cosseted, loved pieces of equipment that people don’t generally take outside of the lab and bury in the ground in the English summer,” Wilson chuckled.

High-speed video cameras capable of shooting at 100 frames/second were used to film the animals in motion and measured the force created by the running animal, calibrated with how much it weighed. Surprisingly, trained greyhounds galloped faster than captive cheetahs, clocking up a top speed of 19m/s compared with the cheetahs’ 17.8m/s. That’s a bit above half the speed the cheetah’s are capable of.

“They have lived in a zoo for several generations and have never had to run to catch food. They have probably never learned to run, particularly,” Wilson said. “The next stage is to try to make measurements in wild cheetahs in the hope of seeing higher speeds.”

The findings were presented in the Journal of Experimental Biology.