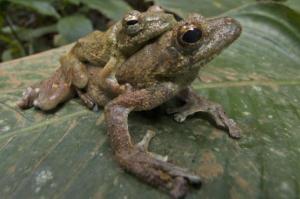 We live in a world which we think we know everything about but that is obviously not true; people believed the same thing about a hundred years ago and well we have discovered some things since then. Such would be the case with an expedition which explored one of the largest remaining blocks of tropical forest in Western Africa and they have discovered significant populations of new, rare and threatened species underscoring the area’s high biological diversity and value.

The findings from a 2006 expedition to Ghana’s Atewa Range Forest Reserve (Atewa) led by Conservation International’s Rapid Assessment Program (RAP) are presented in a report made public December 6, 2007. Some species there include Critically Endangered frog species (Conraua derooi) which are probably found just there in the whole world as well as an unusually high 22 species of large mammals and six species of primates including two species of global conservation concern: Geoffroy’s pied colobus (Colobus vellerosus) and the olive colobus (Procolobus verus).

But we should not forget about the 17 rare butterfly species and the six bird species of global conservation concern including the brown-cheeked hornbill (Bycanistes cylindricus) and the Nimba flycatcher (Melaenornis annamarulae); they even discovered nine species new to science: a spider tick whose lineage is as old as the dinosaurs and eight species of katydids.

“Atewa harbors one of the healthiest and most important ecosystems in Western Africa and is the crown jewel of Ghana,” said Leeanne Alonso, a Conservation International (CI) senior scientist who heads the RAP program. “This is an SOS to create with local communities and other stakeholders viable economic development options that also protect Atewa’s valuable natural resources.”

They found trees as well and namely the only tree fern species (Cyathea manniana) found in Ghana. Other places where similar species are found include forests in Brazil and Madagascar. The report makes a point in stating that eco-tourism could be an optimal industry to develop because of Atewa’s beauty, richness in species and close proximity to the capital city.