A lot of the climate change models today are based under the assumption that greenhouse gas emissions weren’t that significant pre-1850, when the industrial age boom began. A new study from scientists at Utrecht University in the Netherlands found otherwise, and reported that human activity was responsible for plenty of greenhouse gas emissions in the atmosphere even as far as  2000 years ago, warranting a re-evaluation of the benchmark for measuring global warming.

The researchers, lead by Celia Sapart, analyzed  56 ice core samples drilled in north and central Greenland for levels of carbon 13 – an isotope of methane. The data was overlaid with other indicators of human induced climate warming from histryory, including deforestation and charcoal found in sediment.

Scientists found that methane production was high around 100 B.C., during the heyday of the Roman Empire, only to decrease at around A.D. 200 as the empire began to lost its influence and began to crumble. Also in ancient time, the  Chinese Han Dynasty (206 BC-220 AD) along with an advanced Indian civilization at the time chopped down millions of trees to heat homes and power their metal-working industries.

“Based on archaeological metal production estimates, we calculate that the charcoal used for metal production at the peak of the Roman empire alone could have produced 0.65 teragrams (650 million tonnes) per year of methane,” says the study. 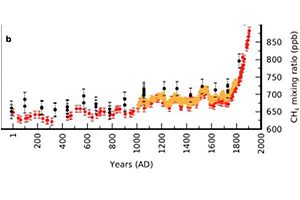 Around 1400, methane intake in the atmosphere again peaked once with the mini-Ice Age, as human activities like heating and food production were responsible for 20 percent to 30 percent of the methane released from burning organic matter. This cold snap in the northern hemisphere was linked by many researchers to solar activity.

Thus, the researchers estimated that between 100 BC and 1600 AD roughly 28 extra billion tonnes of methane per year were added to the atmosphere, according to the analysis. Methane has 20 times the warming power of carbon dioxide.

“It was believed that emissions started in 1850. We showed that humans already started to impact greenhouse effects much before,” study co-author Célia Sapart of Utretcht University in the Netherlands said.

Previously, researchers thought natural events produced almost all of the methane prior to industrialization. The dutch researchers’ findings might warrant a tweaking of current climate change models to better reflect reality.

“The big goal of all this is to try to predict how greenhouse gas concentrations in the atmosphere are going to evolve in the future,” Sapart said. “Already at this period humans were emitting greenhouse gases, especially methane, so we need to reconsider what are natural conditions.”