by Tibi Puiu
in Biology, Science, Studies
Reading Time: 2 mins read
A A

People used to think Chimpanzee tool-use was impressive, but it in the past decades it has  been documented that dolphins, whales or birds posses the necessary intelligence to use tools and the environment surrouding them in their benefit. A recent video posted by a professor of ecology and evolutionary biology at the University of California, Santa Cruz, puts things into perspective even further, as it clearly shows a fish using a tool.

Giacomo Bernardi, the biologist in question, was diving with his camera when he caught right in the act a orange-dotted tuskfish as it was digging a clam out of the sand.  The fish then carried the clam over to a rock and threw it against the rock in order to crush it.

“What the movie shows is very interesting,” Bernardi was quoted as saying in a press release. “The animal excavates sand to get the shell out, then swims for a long time to find an appropriate area where it can crack the shell. It requires a lot of forward thinking, because there are a number of steps involved. For a fish, it’s a pretty big deal.”

The footage was shot in Palau and was described by Bernardi it in the journal Coral Reefs. 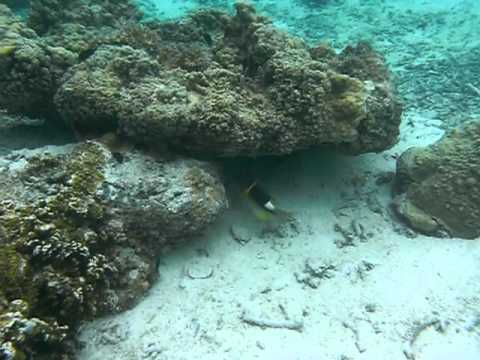 Evidently, the orange-dotted tuskfish is some what more far witted than its goldfish cousin, and one can only presume that this is far from being an isolated incident. After all the peculiar things we’ve published on this website, you’d think one can become accustomed to all kinds of oddities of nature (oddities to the still ignorant folk that we are). Sorry to say, but not a day goes by without finding myself surprised by all these secrets of life that get unraveled from time to time – some small, some vital. What’s next?