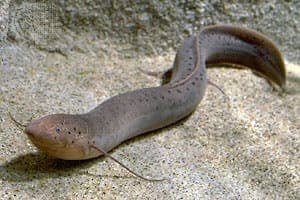 Researchers studying a primitive fish exhibiting an eel-like body, and which can breath above water, claim that the creature’s ancestors might actually be the true innovators of walking.

By using an extensive video analysis, the researchers observed how the African lungfish, when put out of the water, uses its pelvic muscles to not only lift itself off the surface, but also propel itself forward. These abilities were thought to have initially originated in tetrapods, the early ancestors of all walking beings, be it dinosaurs or mammals, which appeared later than the lungfish ancestors.

Researchers are now looking into how this discovery might reshuffle the order of events which eventually lead to the transition from marine to terrestrial life. Ancient fossils footprints first believed to be those of tetrapods, might actually had been produced by the lungfish primitive ancestors.

“In a number of these trackways, the animals alternate their limbs, which suggested that they must have been made by tetrapods walking on a solid substrate,” said Melina Hale, PhD, associate professor of Organismal Biology and Anatomy. “We’ve found that aquatic animals with fundamentally different morphologies and that aren’t tetrapods could potentially make very similar track patterns.”

Like a living time capsule, the lungfish has more or less remained the same for eons, considered by paleontologists a veritable treasure due to its  evolutionary heritage. It’s an animal closely related to the first truly terrestrial beings, however all of its now distant cousins have gone extinct – the lungfish is a stubborn survivor that denies change and evolution.

“If you showed me the skeleton of this creature and asked me to make a bet on whether it walks or not, I would have bet it couldn’t,” Neil Shubin at the University of Chicago said. “Their fins seem like the furthest thing from walking appendages possible.”

But it does, and University of Chicago researchers have shown how the African lungfish uses its puny limbs, along with alternate pelvic and hind motion to its body off the surface and propel  forward.

“It’s tempting to attribute alternating impressions to something like the footfalls of an early tetrapod with digits, and yet here we’ve got good evidence that living lungfish can leave similar sequences of similar gait,” said Coates, PhD, professor of Organismal Biology and Anatomy. “The fin or limb use thought to be unique to tetrapods is actually more general.”

What this discovery proves is that many of the developments of terrestrial life millions of years ago might had in fact be due to the lungfish’s ancestors, and not to early tetrapods, as it is currently believed. Scientists of University of Sydney, who also studied lungfish, came to a similar conclusion just a few months ago in a published study, after they looked to the animal to understand how its pelvic muscles lead to modern day walking limbs. Humans, as the Australian researchers claim, are just modified fish.

“This shows us — pardon the pun — the steps that are involved in the origin of walking,” Shubin said. “What we’re seeing in lungfish is a very nice example of how bottom-walking in fish living in water can easily come about in a very tetrapod-like pattern.”