by Mihai Andrei
in Biology, Environment, Studies
Reading Time: 2 mins read
A A
Share on FacebookShare on TwitterSubmit to Reddit

Out of the 40.000 or more species of spiders found up to date, every single one of them is a predator, capturing their prey using a complicated web, hunting them directly, or using other creative methods; all except one, that is. Bagheera kiplingi (odd choice for a veggie spider) is the first species that primarily feasts on something else than meat. 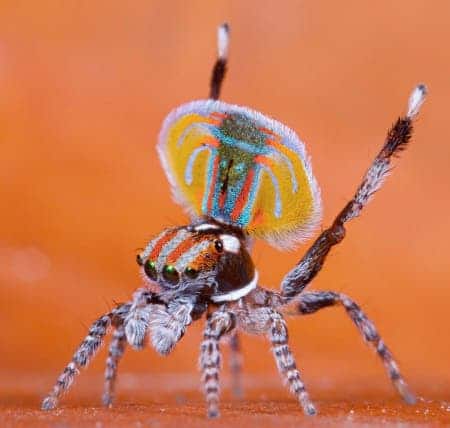 The type of plants it enjoys is called Beltian bodies, and it basically represents leaf-tip structures that are produced by acacia. What’s really interesting is that another animal that fancies the same food is the ant. Some ants have an almost symbiotic relationship with the acacia shrubs, living in the hollow spines and eating an amount that also allows the acacia to thrive, and protecting the plants from other invaders. This relationship has been studied and described in numerous studies.

“This is really the first spider known to specifically ‘hunt’ plants; it is also the first known to go after plants as a primary food source,” said Christopher Meehan of Villanova University, who took notice of the spiders during a field course in Mexico.

Even more, this species of spider is the first known to eat solid vegetative food at all. They do occasionally prey on small invertebrates, but in an overwhelming proportion, their food is vegetal.

“I’ve done the math several times, and even the most conservative estimates point to near-total vegetarianism,” Meehan said. “Almost all of the prey that the spiders do eat are acacia-defending ant larvae.”

“Spiders aren’t really thought to be capable of eating solid food at all,” Meehan said. Spiders digest their prey externally, he explained, and any matter bigger than about one micrometer gets filtered out of the vital juices in the spider’s pharynx. Beltian bodies, however, are 80 percent structural fiber, and quite large by spider standards. “The acacia spiders consume these nutrient-enriched—but not particularly nutrient-rich—’vegetables’ completely, often in less than five minutes.”

But eating the food of an ant colony… that’s definitely not something you should be eager to do, so how does the spider get away with it??
Well, according to Meehan, they have what can only be called “sheer wit”.

You’ve gotta hand it to the guy… how many of us would go through all that just to keep a vegetarian diet ??