Bugs could clean your sewage AND give you free power 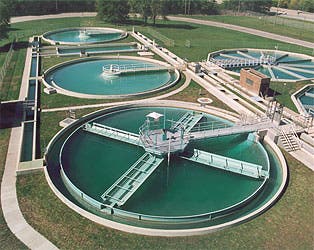 For most bacteria, a fresh supply of air is pretty much the best thing that can happen; however, for some, that is quite unbearable. Basically, they can’t stand it. They’d do anything to get rid of it. These little guys can be the key to a process so efficient that in the end will not only clean your sewage, but even give you power instead.

In conventional sewage cleaning plants, microorganisms digest the solid waste and convert it into methane, but they ignore liquid waste, which must also be eliminated before water can be declared clean enough. In order to solve this, engineers use treatment plants which consume quite a lot of energy, because the process uses different bacteria that needs a constant supply of oxygen.

But now, a team from Delft University of Technology in the Netherlands led by Gijs Kuenen is developing a technique that cuts out the energy consuming processes. Furthermore, Gjis intends to use a by product of this method (methane) as fuel.

“This is about trying to make waste water treatment plants completely sustainable, in the sense that they could even produce energy, which is not the case in present treatment facilities,” says Kuenen.

This month, they will begin a pilot plant to prove their study. This type of bacterial use shows great promise in the future, as bacteriologists have speculated for more than two decades ago.

“The anammox story shows how fundamental discoveries by microbiologists can revolutionise waste water treatment,” says Michael Wagner, a microbiologist at the University of Vienna in Austria.