by Tibi Puiu
in Inventions, Technology
Reading Time: 2 mins read
A A
Share on FacebookShare on TwitterSubmit to Reddit 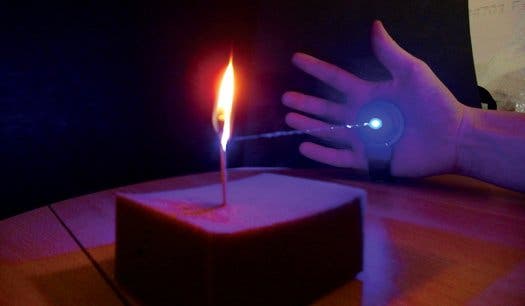 Anyone scarcely into Iron Man will tell you they wouldn’t want anything more for Christmas than a bone melting ray gun weapon bursting out of your palm. Well, that a fission core artificial heart, but that’s stretching it a bit too far with Santa. Patrick Priebe, a German lab technician, and firstly an Iron Man aficionado, has developed in the past two years a very impressive high power laser glove capable of inflicting real damage. With an output of 1,000 milliwatts (your normal two bit handheld laser has about five milliwatts), his latest version, called Laser Glove MK III, can even blind a person if caught in the ray without any eye protection. Just check it below.

The device although very ingenious, was fairly simple to build. Patrick, used a two-millimeter sheet of brass, which he shaped into a C-like form for hand gripping. Inside the housing, he included a large ring that holds a laser diode from a Casio projector and works as a heat sink, powered by standard 7.4 volts  lithium-ion batteries. Lastly, he gave it the glove its striking authentic look by painstakingly applying the primer, filler, base coat and matte paint.