by Mihai Andrei
in Inventions, Psychology
A A

German physicists (who else) reported creating a Stirling engine no larger than 3 micrometers across, which functions just as good as its normal size version – with a little sputter once in a while. 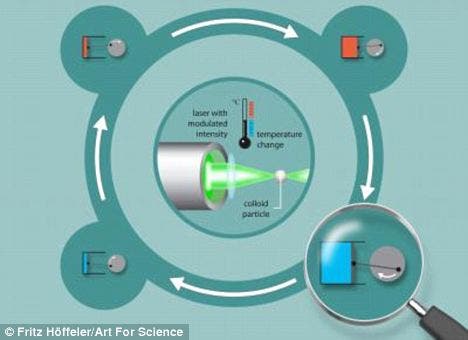 I read about this on several other websites, and this device was called a steam engine – which is not really correct. A Stirling engine does work on steam, but it only works on gases, while a steam engine works on both fluids and gases. The researchers at the University of Stuttgart and the Max Planck Institute for Intelligent Systems say the device works properly, thus confirming that there is nothing in the way of building a small, efficient and fully functional engine.

“We’ve developed the world’s smallest steam engine, or to be more precise the smallest Stirling engine, and found that the machine really does perform work,” says Clemens Bechinger of the University of Stuttgart. “This was not necessarily to be expected, because the machine is so small that its motion is hindered by microscopic processes which are of no consequence in the macroworld.”

The result of those microscopic forces are an occasional sputter.

Of course, researchers couldn’t construct their engine like Robert Stirling made his own, 200 years ago. They replaced the average the engine’s piston with a focused laser beam with an intensity that varied periodically; the working gas was practically one individual plastic bead measuring three micrometers, which floats in water.

The fact that this machine sometimes runs a little rough is the result of unpredictable, random collisions; what happens is the water molecules, which are continuously in motion, collide with this particle/engine, giving it a rough time.

“This effect means that the amount of energy gained varies greatly from cycle to cycle, and even brings the machine to a standstill in the extreme case,” explains Stuttgart’s Valentin Blickle. Since macroscopic machines convert around 20 orders of magnitude more energy, the tiny collision energies of the smallest particles in them aren’t important, he says. “Our experiments provide us with an initial insight into the energy balance of a heat engine operating in microscopic dimensions,” says Bechinger. “Although our machine does not provide any useful work as yet, there are no thermodynamic obstacles, in principle, which prohibit this in small dimensions.”