by Mihai Andrei
in Inventions
A A

It may not be the best footwork in the world, because much like your uncle after a few beers, Charli doesn’t really want to lift its feet too far from the floor – but it’s definitely something fun to look at. 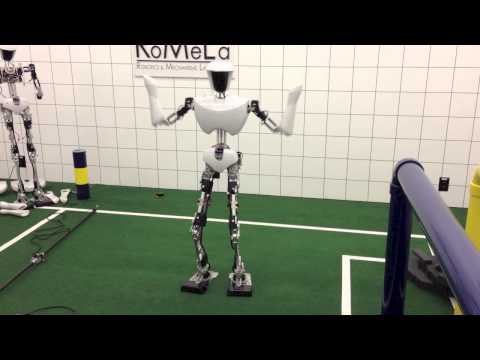 This US Navy robot has all the moves: the lasso toss, the horse riding, the arm spread – he even takes a bow at the end of the dance. What, don’t tell me, you haven’t seen the crazy Korean hit sensation Gangnam style with over 500.000.000 views on youtube ? Then your ears are of the few which have been spared.

Charli – or Cognitive Humanoid Autonomous Robot with Learning Intelligence – was awarded the TIME invention of the year prize in 2011, as he is the first untethered, autonomous, full-sized, walking, humanoid robot with four moving limbs and a head, built in the United States. He was developed by researchers at Virginia Tech, and much like the Koreans, he seems to enjoy the Gangnam style.

But dancing is not his only hobby: his hobbies also include holding speeches, operating a computer and playing soccer – he’s a repeat winner in the autonomous robot soccer competition, RoboCup, in the Adult size league. However, his day job is to fight fires onboard warships, using his main ability, which is self orientation and standing upright.