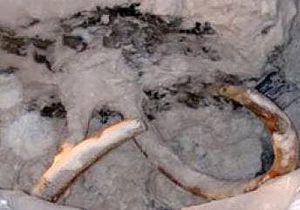 No, this is not the prologue for a Steven Spielberg movie. Yevgeny Salinde, a 11 year old boy, found what’s been later identified as a 30,000 year-old perfectly preserved mammoth carcass while strolling near his home in Russia’s far north, some 3,000 kilometers away from Moscow. The boy told his parents, who work at the Sopkarga polar weather station, who in term contacted the authorities. Experts believe this is the 2nd most well preserved mammoth specimen ever discovered. A similar find like this hasn’t been encountered in a century.

“He sensed an unpleasant odour and saw something sticking out of the ground — it was the mammoth’s heels,” said Alexei Tikhonov, director of the Saint Petersburg-based Zoological Museum, who rushed to the tundra after the boy’s family had notified scientists of the historic find.

When paleontologists reached the site, they did not only find a skeleton, like initially expected, but a complete carcass – skin, meat, fat hump and organs, all extremely well preserved. Scientists estimate the mammoth was 15 to 16 years old when it succumbed in the summer because it lacked an undercoat and had a large reserve of fat. The specimen was excavated after more than a week of hard work. To retrieve it from the permafrost, they had to use special steam generators to free parts of the carcass from snow and frozen soil.

The mammoth, which has been named Zhenya (short for Evgeny) after the boy, will become the main exhibit of the Taimyr Regional Museum, which has already agreed to transfer the unique find to the Russian Academy of Sciences for further study.