by Tibi Puiu
in Physics, Research
Reading Time: 3 mins read
A A
Share on FacebookShare on TwitterSubmit to Reddit

Apparently the atom isn’t that indivisible after all. Scientists at University of Bonn have managed to split an atom into two with a special laser, in special conditions, before merging it back together. Just like in the case of light, quantum mechanics allowed an atom to be split and then fused back. 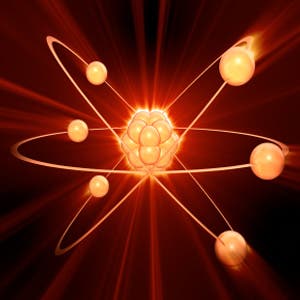 But how is this possible? In quantum mechanics, matter, say an atom, can exist in several different states at once – this formed the absolute basis of the so called “double-slit” experiment for the researchers. For their experiment the scientists successfully manged to keep a single atom in two place at once more than 10 microns apart from one another, an astronomical distance at the atomic scale.

This occurred only because the researchers imposed the right, necessary conditions for the quantum effect to take place. A cesium atom was cooled very close to absolute zero temperature using lasers, and was then moved with the help of another laser. The lasers were absolutely critical to the experiment, being employed to correct the atom’s spin. An atom can spin in both direction – clockwise or counterclockwise; for their current work, the researchers made the atom spin in both directions at the same time.

“The atom has kind of a split personality, half of it is to the right, and half to the left, and yet, it is still whole,” explained Andreas Steffen, the publication’s lead author.

If imaged, the atom sometimes shows on the left, the right, or in the center, but the split can be proved by putting the atom back together

“Thus an interferometer can be built from individual atoms that can, e.g., be used to measure external impacts precisely. Here, the atoms are split, moved apart and joined again. What will become visible, e.g., are differences between the magnetic fields of the two positions or accelerations since they become imprinted in the quantum mechanical state of the atom. This principle has already been used to very precisely survey forces such as Earth’s acceleration.”

Of course, this wasn’t all for show and tell. The researchers hope to better learn not only how to control individual atoms, but how multiple atoms  are linked together using quantum mechanics. This insight can be then used to develop quantum systems, to simulate intricate phenomena, like photosynthesis, which can’t be simulated by today’s supercomputers.

“For us, an atom is a well-controlled and oiled cog,” said Dr. Andrea Alberti, the team lead for the Bonn experiment. “You can build a calculator with remarkable performance using these cogs, but in order for it to work, they have to engage.”

“This is where the actual significance of splitting atoms lies: Because the two halves are put back together again, they can make contact with adjacent atoms to their left and right and then share it. This allows a small network of atoms to form that can be used — like in the memory of a computer — to simulate and control real systems, which would make their secrets more accessible.”

Source: University of Bonn via Planetsave