by Tibi Puiu
in Other
A A

Kinetic art is one of the most fascinating art forms out there. A painting can sometimes seem so vivid that it comes to life and almost grabs you, a particular song might be able to touch parts of your soul which you wouldn’t even know are there otherwise, but kinetic art literally impresses through its moving elements that actually form a “living” art system.

In the video below, you can see a fine example of kinetic art by David Bynoe in which he recreates the natural flow of a wheat field under the influence of wind. Here’s how he describes it:

“This is a kinetic sculpture I built to look like a field of wheat blowing in the wind. It consists of 40 wooden poles, each about 6′ high that are hooked up via a series of ropes to a pair of large motorized cams. Each cam turns at a slightly different speed, and the movement of each is mixed so that it will take about 14 minutes for the machine to repeat its pattern. The show is happening at Truck Gallery in Calgary, Alberta, Canada, it opens on June 3rd, and runs till the 30th.” 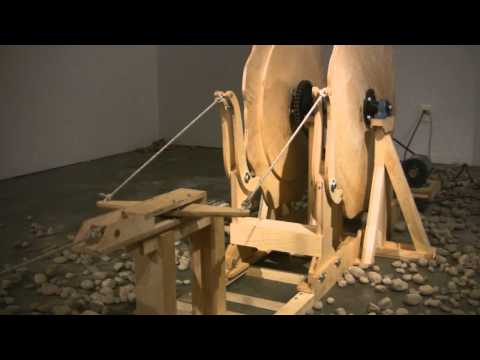