Social media was ecstatic - just look at this video of an orangutan bottle-feeding a tiger cub. Tens of millions of people tuned in to watch this "cuteness overload"... but the truth behind this is not cute at all. It's actually quite saddening. We'll discuss why, after the video.

by Alexandra Gerea
in Animals, News, Videos
A A

Social media was abuzz when it came out – just look at this video of an orangutan bottle-feeding a tiger cub. Tens of millions of people tuned in to watch this “cuteness overload”… but the truth behind this is not cute at all. It’s actually quite saddening. We’ll discuss why, after the video. 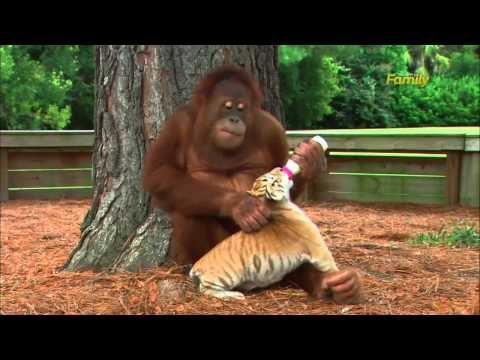 The almost surreal scene came from Myrtle Beach Safari’s The Institute of Greatly Endangered and Rare Species (T.I.G.E.R.S.) in South Carolina, United States. They claim to be a safe haven for wildlife (especially tigers), but in reality, the facility is little more than a touristic attraction where animals are taken to serve as props for visitors. Let’s face it – tigers are magnificent creatures, and few people would pass the chance of being around one if they knew it was completely safe. After all, most visitors spend a few hours with wild animals, give some money which they believe goes to animal conservation, and they’re actually think they’re helping – but they’re not.

Animals at T.I.G.E.R.S. are bred or bought solely for profit, with no conservation efforts and without even considering reintroduction to the wild. But don’t take it from me, take it from them:

“You can support us in our conservation efforts by participating in our T.I.G.E.R.S. preservation station photo encounter. During this encounter, you will get hands-on with a baby tiger and a young ape while they sit on your lap. Photo encounters start at $100 a person […]”

OK, Tigers are put on display in small enclosures, removed from their mother, but this is all… for conservation purposes, right? According to their website, the Rare Species Fund (a charity owned by them) “donated and personally transported 7 tigers from our Myrtle Beach, South Carolina preserve to the Samutprakarn Wildlife Preserve South of Bangkok.” It’s all fine, until you find out that the Samutprakarn Wildlife Preserve in Thailand is not really a preserve. Actually called the Samutprakarn Crocodile Farm and Zoo, the facility is another for-profit organization, hosting what they call “freak” animals such as 6-legged crocodiles. The money they spend on “conservation” is actually spent on bringing animals into captivity.

As a matter of fact, breeding animals in captivity seems to be one of their main activities – including inbred animals such as ligers. Ligers are crossbred from lions and tigers; they are sterile, have shorter lifespans and often suffer from numerous health problems. Due to their size, the tigress mother can only deliver a liger by Ceasarian section and there are numerous reports of mothers rejecting her hybrid cubs all together. But of course, people are fascinated by them, so they have the potential to make a lot of money. All animals seem to be bred and trained for this specific purpose, and the training starts quickly after birth.

“Cubs used by exhibitors to make money from handling are typically torn from their mothers shortly after birth, a torment to both cub and mother. They are deprived of the comfort and nutrition of nursing and grooming by the mothers, subjected to unnatural levels of stress that lower their immune systems, and typically not allowed the natural amount and timing of sleep in order to satisfy customers,” 911animalabuse writes.

T.I.G.E.R.S. are very vague about what training methods they use, but they have a hefty list of USDA violations. They were cited for abandoning deer and peacocks and in total have wracked up 38 more violations between 1988 and 2014. For a fee, you can swim with Bubbles the elephant, or stand on her like on a surfboard. It’s obvious that the elephant was subjected to heavy conditioning to accept this treatment. But there’s another puzzling (and extremely worrying) question: what do they do with tigers after they’re no longer cubs?! They claim they’ve trained over 400 cats yet there are only some 60 cats currently living at Myrtle Beach Safari, so what happened to the rest of them? Well… no one really knows; from what I could there is no tiger tracking program in the US. Among the few known cases took place in 2009 when they gave two cats to a man who had lost his USDA license due to abandoning 75 of his own tigers in Palm Bay, Florida. Their final destination was to Zoological Imports 2000, an exotic dealership.

This is not how animals should be treated, and videos like that one may be cute, they come at quite a price. Think twice before encouraging such “sanctuaries”, and before sharing. This might turn out to be not so cute after all.