by Dragos Mitrica
in Animals, Videos
A A

Seafarers on a 2012 National Geographic-Lindblad expedition to Antarctica found this amazing and rare “blond” penguin on a colony on Aitcho Island.

The penguin actually suffers from a condition called isabellinism or leucism – not albinism.Though technically separate conditions, isabellinism and leucism are used interchangeably 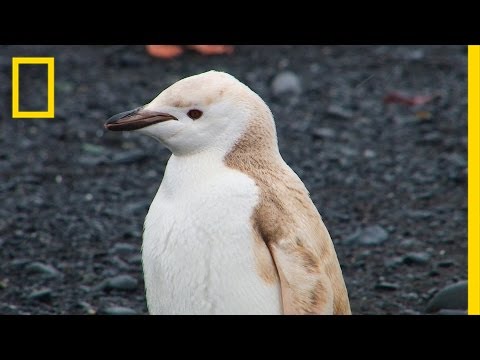 In albinism, there is a complete or partial lack of the skin pigment called melanin (responsible for the color black). In leucism however, there is a reduction in all types of skin pigment, not just melanin. A further difference between albinism and leucism is in eye colour. Due to the lack of melanin production, albino animals and humans often have red eyes – while in leucism, you get colored eyes.

Leuc- (in Latin) or Leuk- (in Greek) is a prefix used to describe the color white – like for example leukocyte, a white blood cell.