Lightning in slow-mo – VIDEO in 7,207 frames per second

by Tibi Puiu
in Videos
Reading Time: 2 mins read
A A
Share on FacebookShare on TwitterSubmit to Reddit 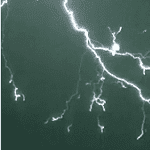 In this amazing slow-motion video, the folks from ZT Research used a high resolution camera to capture a full lightning bolt from inception to it striking the ground. NASA‘s APOD serves a scientific explanation of the phenomenon:

“The above lightning bolt starts with many simultaneously creating ionized channels branching out from an negatively charged pool of electrons and ions that has somehow been created by drafts and collisions in a rain cloud. About 0.015 seconds after appearing — which takes about 3 seconds in the above time-lapse video — one of the meandering charge leaders makes contact with a suddenly appearing positive spike moving up from the ground and an ionized channel of air is created that instantly acts like a wire. Immediately afterwards, this hot channel pulses with a tremendous amount of charges shooting back and forth between the cloud and the ground, creating a dangerous explosion that is later heard as thunder. Much remains unknown about lightning, however, including details of the mechanism that separates charges.”