It took a year and 30 students to make the fastest accelerating vehicle in the world: the grimsel.

by Tibi Puiu
in News, Videos
Reading Time: 1 min read
A A

It took a year and 30 students at ETH Zurich and Lucerne University of Applied Sciences and Arts to make the fastest accelerating vehicle in the world: the grimsel.

It looks like a small Formula 1 car, but don’t let appearances fool you — this is one fast ride, and the current record holder for 0 to 100 km/h acceleration. Grimsel clocked in only 1.513 seconds smashing the previous record holder by more than 200 milliseconds.

Grimsel is the fifth completely electric vehicle made by the Academic Motorsports Club Zurich (AMZ) and the fastest yet. It only weighs 168 kg, owing to the extensive use of carbon-fibre materials. Its light weight coupled with the four wheel hub motors capable of generating 200 HP and 1700 Nm of torque makes it zip like lightning. Moreover, AMZ’s proprietary traction control system individually adjusts the performance of each wheel so acceleration is upped even further. Who said electric cars can’t be fast? 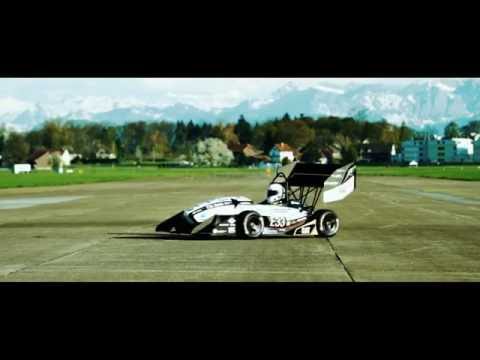