Travels in Geology — Arkansas: A geologic diamond in the rough

Ever wanted to dig your own diamonds? Well, now you have the chance.

by Contributing Author
Reading Time: 3 mins read
A A

The right geological conditions resulted in the presence of diamonds in Arkansas — and this historical diamond deposit is open to the public for collecting.

Mine your own diamonds

North America is not a continent known for its wealth of gemstones — while there are hundreds of rich gold and metal deposits, fine gems were difficult for explorers and prospectors to find. Crater of Diamonds State Park is the location of one of only two diamond pipes in the United States and the only diamond mine in the world where the public is welcomed to try their hand at mining diamonds. The right set of geological conditions allowed for the presence of diamonds and a history of mining attempts eventually led to the park as we see it today.

Geological History of the Crater of Diamonds

Diamonds form deep in the Earth’s crust and upper mantle, over 60-100 miles deep. Volcanic and tectonic events can bring diamonds closer to the surface, but the right conditions must be met in order for the diamonds to not be destroyed in the process. This is the case here: roughly 100 million years ago, a volcanic vent exploded in Arkansas, bringing mantle rock towards the surface

That volcanic vent formed an 83-acre crater and is known as the Prairie Creek Diatreme. The rapid rise of material from the mantle allowed diamonds to be brought up to the surface without being carbonized or otherwise destroyed. A hundred million years of erosion reduced the profile of the crater and resulted in the landscape of the area today.

Mining History at the Crater

Diamonds were first discovered at the crater in August 1906 by landowner and farmer John Wesley Huddleston. What followed was a short-lived diamond rush and Huddleston sold his land to investors who would form the Arkansas Diamond Company. Neighboring Huddleston’s land, a portion of diamond-bearing land was owned by M. Mauney who sold three-quarters of the land to Horace Bemis, who formed the Ozark Diamond Corporation. Bemis’ land was eventually sold to a father and son team named the Millars who built a diamond processing plant.

The diamond processing plant was quite successful until it was destroyed in an unsolved arson in 1919. After many decades of failed mining attempts in the area, competing public diamond collecting tourist attractions were opened under the names ‘The Crater of Diamonds’ and ‘The Big Mine’. In 1969 a corporation bought both diamond-bearing properties and continued operating the diamonds fields as a tourist attraction. The state of Arkansas bought the lands in 1972 to form the Crater of Diamonds State Park. 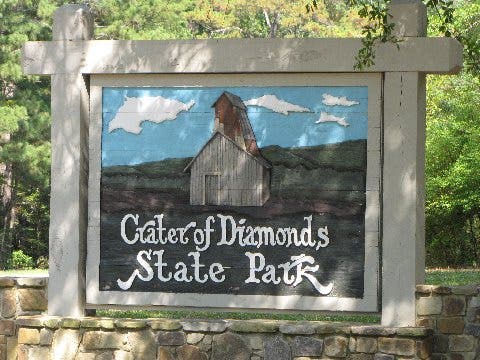 The Crater of Diamonds State Park is the only diamond mine where visitors are allowed to try to find diamonds and keep them. The park is open year-round aside from Christmas, Thanksgiving, and New Years and visitors pay an entry fee and can rent equipment for use in the search for diamonds.

Visitors can also bring their own equipment but are not allowed to use tools that have batteries, motors, or wheels. Park workers will help identify and document all diamonds that are found. Most of the diamonds that are found tend to be less than 1 carat in size (a reference chart can be printed here), but large diamonds do occur; such as the 16.37 carat Amarillo diamond found in 1972.

The Right History to Make a Diamond Park

The right set of geological conditions helped to bring diamond deposits to a continent that is lacking in gemstones. The many mining failures in the early 1900’s led to the formation of public diamond-collecting tourist attractions rather than commercial mines. The Crater of Diamonds State Park today allows the public to come and try finding diamonds for themselves.