It's the kind of error you never want to pop up in your code: Google’s automatic image recognition software has apparently classified two black friends as 'gorillas'.

by Mihai Andrei
in News, Offbeat
A A

It’s the kind of error you never want to pop up in your code: Google’s automatic image recognition software has apparently classified two black friends as ‘gorillas’. 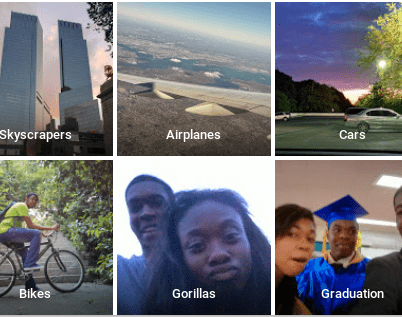 Image recognition is still in its infancy – which means that things can sometimes go pretty bad. Sometimes it’s funny, like when Wolfram Alpha’s algorithms confuses cats with sharks or goats with dogs, sometimes it’s pretty creepy, like when Facebook says it can identify you even when your face is not showing, and sometimes it’s… just wrong. New York programmer Jacky Alcine was browsing some of his pictures when he noticed an album called ‘Gorillas’; he thought that’s pretty strange, as he hadn’t taken photos of gorillas. When he opened the album… lo and behold – it was himself and a friend.

Google has of course already apologized for this cringeworthy mishap. The programmers working on the image recognition software were prompt in accepting and fixing their error following a Twitter discussion.

“Google,” Alciné tweeted, “y’all ****** up.” Yonatan Zunger, the project leader replied: “Lots of work being done, and lots still to be done. But we’re very much on it,” he said. Alciné then wrote on Twitter, “I understand HOW this happens; the problem is moreso on the WHY.”

The team is now working on long term solutions for improving their algorithm, especially when it comes to dark skinned people. The point of this software is to ultimately organize all your similar photos together, so for example you could easily find all birthday pictures in one place. But someone definitely needs to sort this out.

“We’re appalled and genuinely sorry that this happened. We are taking immediate action to prevent this type of result from appearing. There is still clearly a lot of work to do with automatic image labeling, and we’re looking at how we can prevent these types of mistakes from happening in the future.”