The photo that no one gets right at first

Look at this photo. What do you see? A bunch of camels, right? Well, that's right... but look closer - where are the camels?

Look at this photo. What do you see? A bunch of camels, right? Well, that’s right… but look closer – where are the camels? 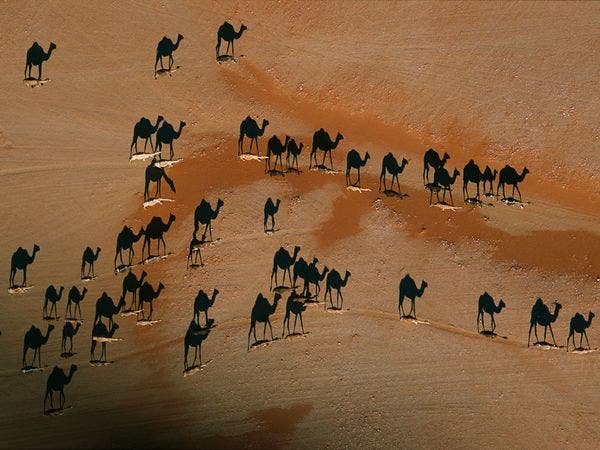 The black shapes you probably thought the camels are, they’re just the shade of the camels seen directly from above (look for the white specs). This spectacular photo was taken by George Steinmetz in 2005 and is without a doubt one of the best photos of the year, being featured not only on the cover of National Geographic, but also on numerous other travel and nature magazines.

This particular image came from the Turkish version of National Geographic. The image was taken from a motorized paraglider – an experimental aircraft that gives him a unique physical perspective over remote places that are inaccessible by conventional aircraft.

Steinmetz has a restless curiosity for the unknown: remote deserts, obscure cultures, the ­mysteries of science and technology. This took him to Africa, hoping to find spectacular sights to capture in his photo.

“I took a year off from studying geophysics at Stanford to go hitchhiking in Africa. I took a camera as I thought I would have opportunities to see things like I had seen on the pages of National Geographic.”

Steinmetz took a year off but it ultimately paid off, as he developed a brilliant photography career that continues to span today. Asked by National Geographic what each and every one of us can do to help protect the wilderness, he replied:

“Try to leave no trace of your passage.”

Take only photos, leave only footprints.