Jabuticaba — the unique tree with fruit on its trunk

by Dragos Mitrica
Reading Time: 2 mins read
A A

You might think there’s something terribly wrong with this tree — but don’t worry, it’s absolutely fine! This is the Jabuticaba, also known as the Brazilian grape tree, and those weird growths are actually its fruit, which is really tasty. 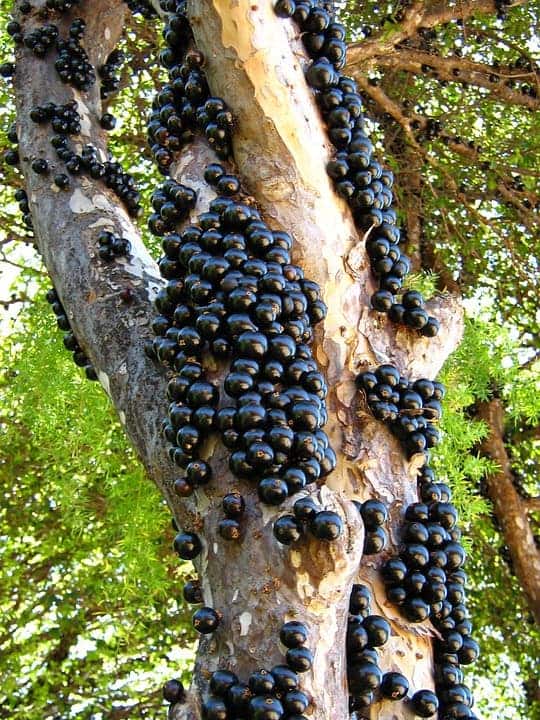 As the name suggests, the Brazillian grape tree grows mostly in Brazil; however, it also grows in Argentina, Chile and Peru. The tree is a slow-growing evergreen with fruit available throughout the entire year; you can eat them raw or use them to make jam. Several potent antioxidant, anti-inflammatory, and anti-cancer compounds have been isolated from the fruit, including one that is unique to the fruit: jaboticabin.

The fruits are initially green, and only turn to this darkish color when they are ripe. The flowers themselves appear on the tree at most twice a year. The eerie white fuzz looks even stranger than the fruits:

But why did this tree evolve in this unique way?

The answer is probably pretty simple: it evolved this way to make it easier for animals who can’t climb to eat its fruit. The tree “wants” the animals to eat its fruit so that they can later expel the seeds away from the parent tree to grow even more Jabuticabas.

The etymology of the tree is also pretty interesting. Jabuti is the Tupi word for tortoise, while caba means place, so Jabuticaba means something like tortoise place. It was likely called this way because the Brazilian giant tortoise enjoys eating fruits which fall to the ground or are very close to the ground.

You can also grow this tree in your own garden if you live in a tropical or subtropical climate; it prefers acidic soils and lots of water. All in all, the Jabuticaba is not only a remarkable tree but also a very tasty one — for humans and tortoises alike.