What are free radicals and antioxidants?

Eat your fruits and veggies, folks.

If you have at least some interest in nutrition, you’ve probably heard a lot about free radicals, antioxidants, and vitamin E. Here, we’ll try to explain all you need to know about them and show you how to make sure a balanced diet can compensate the effect of free radicals.

What are free radicals

Free radicals are simply atoms or groups of atoms with an odd number of electrons. That probably doesn’t answer much, so let’s try to break it down.

Everything in your body is made of cells, and every cell is made of molecules which, in turn, are made from atoms. In short, everything is made of atoms (atoms themselves are made of even tinier things, but that’s way beyond our scope here, so we’ll just stick to atoms). Atoms want to have an even number of electrons – the electrons have a negative electric charge, and they’re attracted to the protons in the atom nucleus. Normally, atomic bonds don’t leave behind odd numbers of electrons, but when this happens, you end up with an unpaired electron – called a free radical. Free radicals are often formed when oxygen interacts with various molecules.

Now, when this happens, the atoms try to compensate and get an extra electron — from anywhere they can. This can lead to a chain reaction – the free radical “steals” an electron from a nearby atom, which in turn then becomes a free radical. This sets up a cascading reaction which can affect an entire cell, or even spread to neighboring ones.

The real damage gets done when important cellular components such as DNA, or the cell membrane are affected. The cells can be killed or start to malfunction, which is the real threat that free radicals pose. It’s funny how something as tiny as an atom stealing an electron can trigger such a butterfly effect.

Now, not all of them are bad. Our body can generate free radicals during metabolism, or to fight viruses or bacteria. But free radicals come in many shapes and sizes, and pollution, radiation, cigarette smoke, and herbicides can also spawn free radicals.

In the 1990s, researchers proposed that free radical damage was involved in the early stages of artery-clogging atherosclerosis and may contribute to cancer, vision loss, and a host of other chronic conditions. There’s even a theory that free radicals are what causes us to age. In summary, there’s quite a lot to worry about.

Other conditions potentially caused or exacerbated by free radicals are:

OK, so where do antioxidants fit into all of this? Well, antioxidants are, as the name suggests, substances that inhibit oxidation. They can swoop in and just donate one of their electrons, stopping the domino effect.

Normally, our body can take care of free radicals, but sometimes it gets overwhelmed and requires external antioxidants. Some studies have shown that people who eat plenty of antioxidant-rich fruits and vegetables are at lower risk of developing these chronic conditions. It’s not really that simple because measuring the number of free radicals in the body is not possible (you really can’t count all the atoms with free electrons). So the effects that antioxidants have on our body are also hard to quantify.

Vitamin C, Vitamin E, and beta-carotene are most often touted as great antioxidants, but randomized, placebo-controlled trials – which provide the strongest scientific evidence – scientists could not not correlated any of these or any single antioxidant to substantial protection against heart disease, cancer, or other chronic conditions. The results of the largest such trials have been mostly negative or inconclusive.

Still, there is some strong science behind the idea that free radicals can be damaging to our body, and that antioxidants can help counteract them. In 2010, a peer-reviewed paper detailed the negative effects they can have.

“Free radicals damage contributes to the etiology of many chronic health problems such as cardiovascular and inflammatory disease, cataract, and cancer. Antioxidants prevent free radical induced tissue damage by preventing the formation of radicals, scavenging them, or by promoting their decomposition. Synthetic antioxidants are recently reported to be dangerous to human health.”

They also supported that our diet should have significant sources of antioxidants, and we shouldn’t rely on synthetic antioxidants.

“Dietary and other components of plants form a major source of antioxidants. [..] Synthetic antioxidants are recently reported to be dangerous to human health.”

There are thousands of antioxidants out there – though using this name is a bit misleading, as this is less a name and more a property. Furthermore, although there are so many of them, each one works differently. So they’re not interchangeable and there’s no way you can eat just one and say you’re getting enough antioxidants – you should eat through all the bunch.

There are plenty of good sources for antioxidants. Here are just some of them, with the corresponding antioxidant:

As you can see, most fruits and veggies have some form of antioxidant. Tea and red wine are also worth mentioning.

Wikipedia also has a table with the foods with the most antioxidants. Beans and blueberries seem to be the champs but again, keep in mind that one antioxidant doesn’t replace the other. 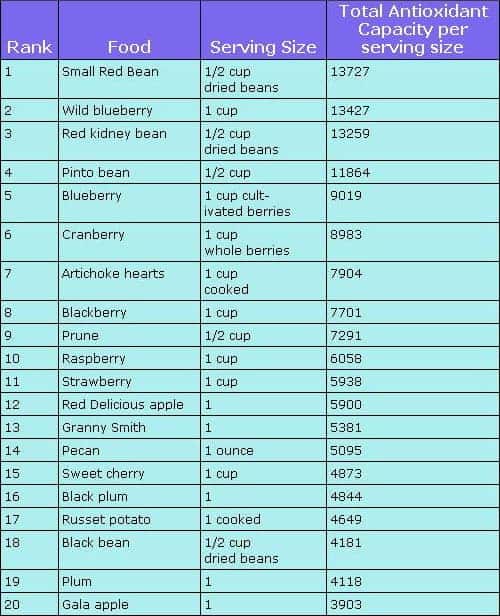 So free radicals are atoms with an unpaired electron. They can wreak havoc in your cells as they try to compensate for this, and potentially resulting in significant damage. Our body generally takes care of them, but sometimes it requires a bit of help, mostly from fruits and vegetables.

The science isn’t yet settled on this one. There are some studies which have found that antioxidants do help our bodies fight diseases, but results have mostly been inconclusive. Still, it’s better to be on the safe side. I mean, what’s there to lose by eating fresh fruits and veggies?