#FossilFriday: Man documents how he reconstructs dinosaurs from fossils

Imgur user anthroteus documented, step by step (with pictures, of course) how he reconstructs dinosaurs from fossils. Here’s his process, as described on Imgur: 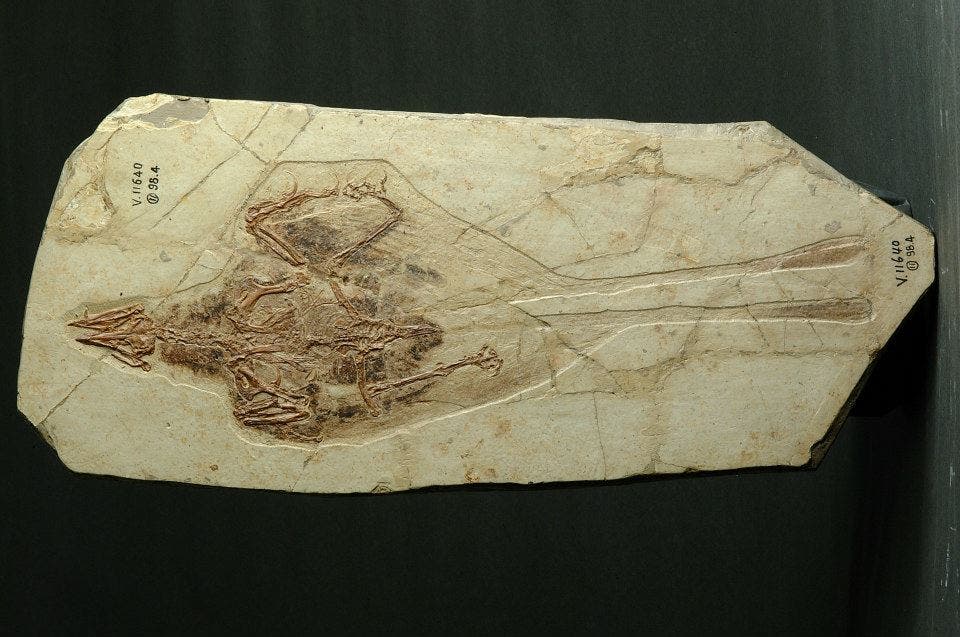 We make life reconstructions of dinosaurs. If you see an awesome dino in a museum, it was probably us (the crappy ones are definitely someone else). We get photos like this to work from, and sometimes we can examine the original material (always an honor and a privilege). We take measurements and make lots of boring calculations. In cases where more than one animal has been preserved, we have to consider variations from one specimen to the next. We factor in fossil evidence (the feathers can be seen and measured in well-preserved specimens), biomechanics, estimated metabolic rate, evolutionary convergence, paleoecology, and lots of other[s]. 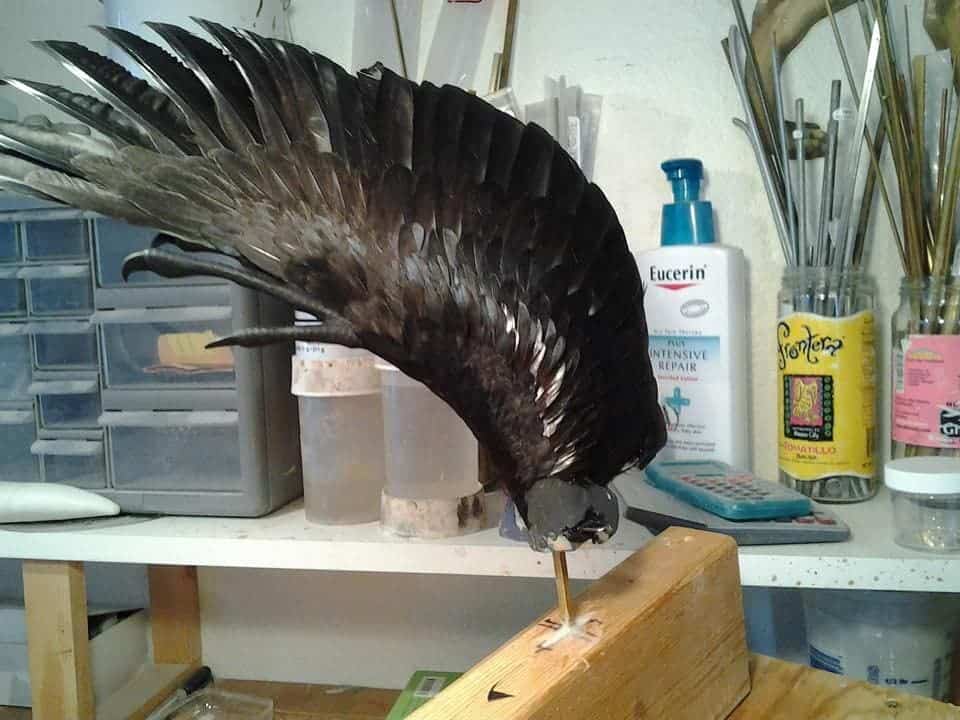 We start with a form that we hand-carve from epoxy. For these feathered guys, it looks a lot like a plucked chicken. The methods are very similar to human forensic reconstruction. We add muscle, connective tissue, fat, and skin to the bones. Then we start adding feathers. We start at the tail and work our way forward, attaching them one at a time, sort of like roof tiles. At this point, the body, wings, feet, toes, and head are all separate pieces. 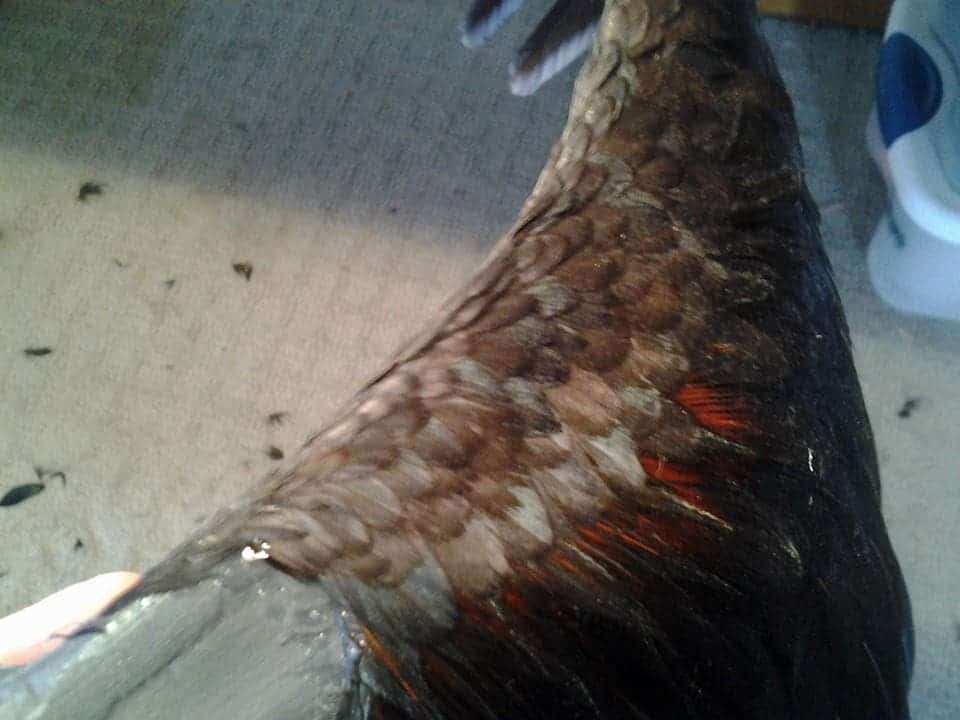 Those little feathers on the front side of a wing are [hard to do]. They each have a very specific home, and are cupped to wrap over the leading edge. 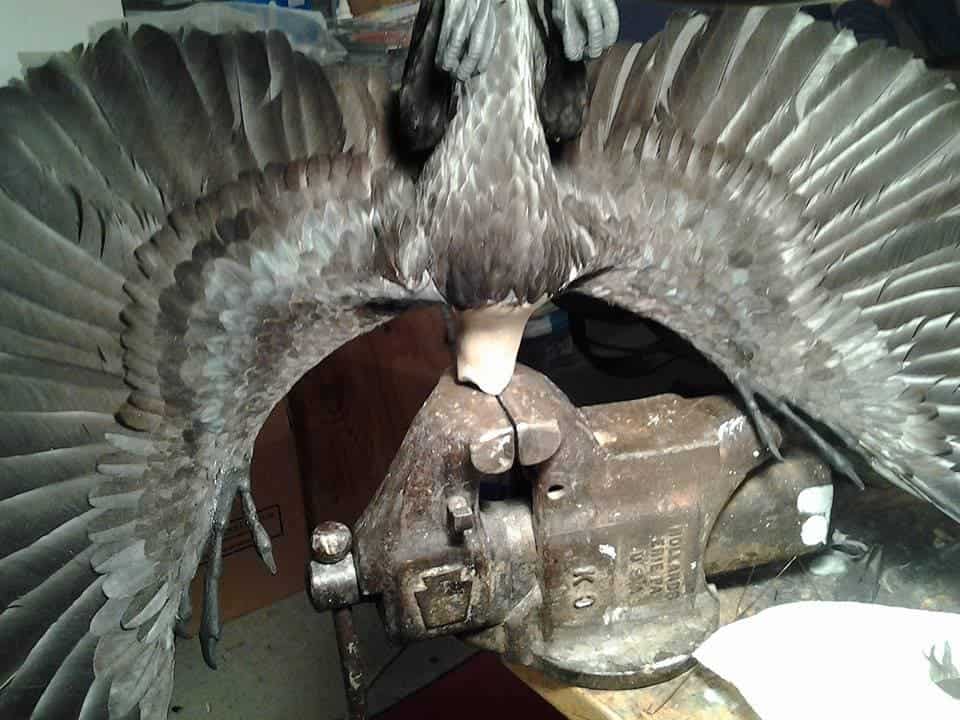 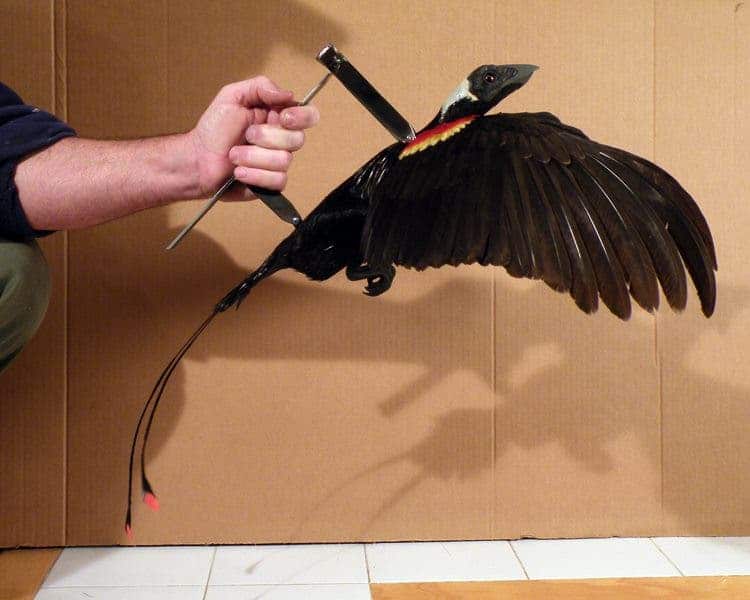 The neck and head are the most difficult because of the size of the feathers. By the time you’re there, you’re basically attaching single filaments, one by one. 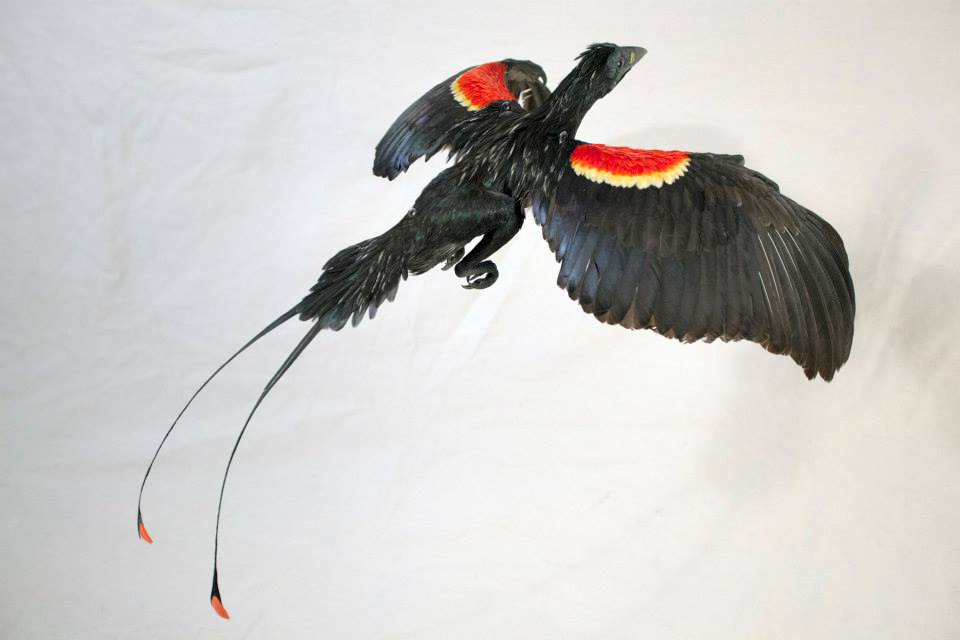 The colors and pose are chosen by the client, from 3 or 4 concept drawings that we provide. This guy was designed after a red-wing blackbird. Those two long (13″) display feathers are preserved in the fossil, as you can see in the first image. Trade secret how we managed to make them! 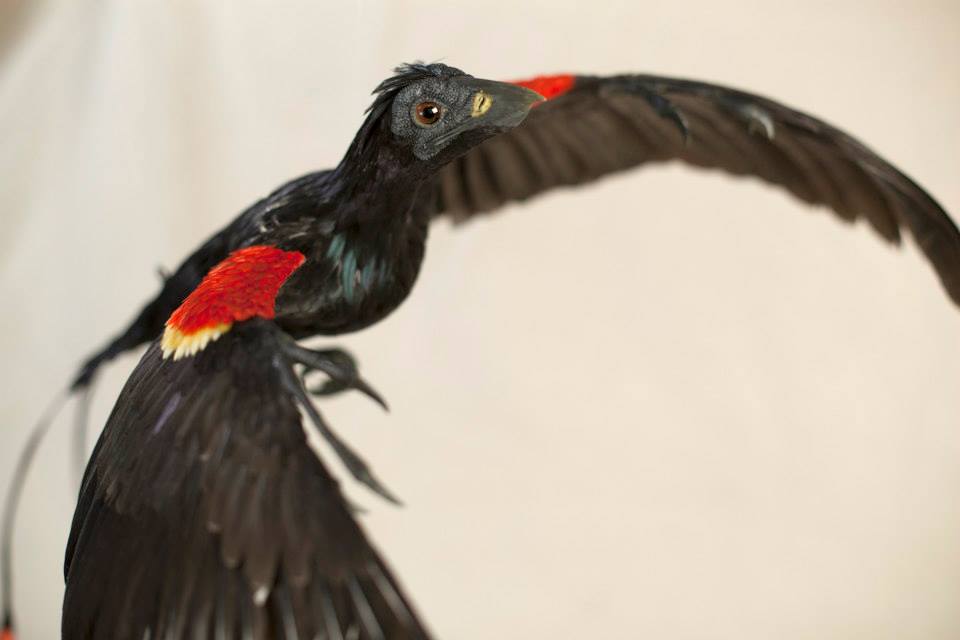 Finished Confuciusornis! This represents about 200 hours of work, and thousands of individual feathers. One by one. We’re a tiny operation–there’s only two of us here, myself and the owner. After spending so much time with the little guys, you tend to get attached to them. But off he goes to South Korea’s natural history museum!

[Confuciusornis was a primitive, bird-like creature which inhabited today’s China from 125 to 120 million years ago. It is one of the most well preserved fossils in the area, with a few hundred complete specimens found to date] 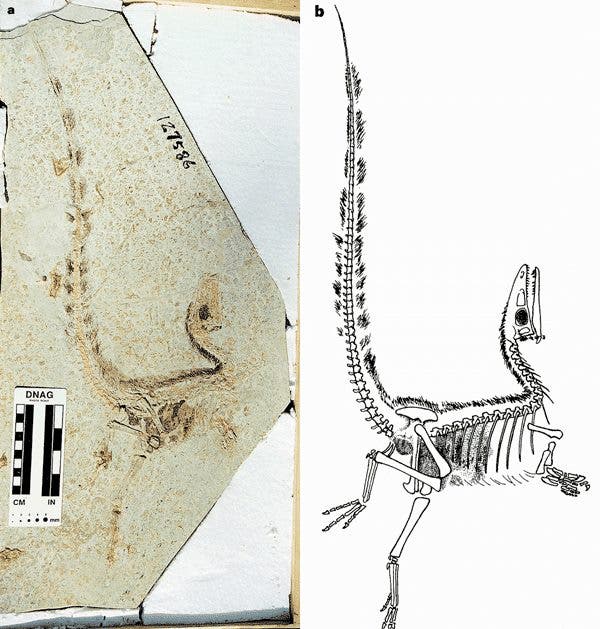 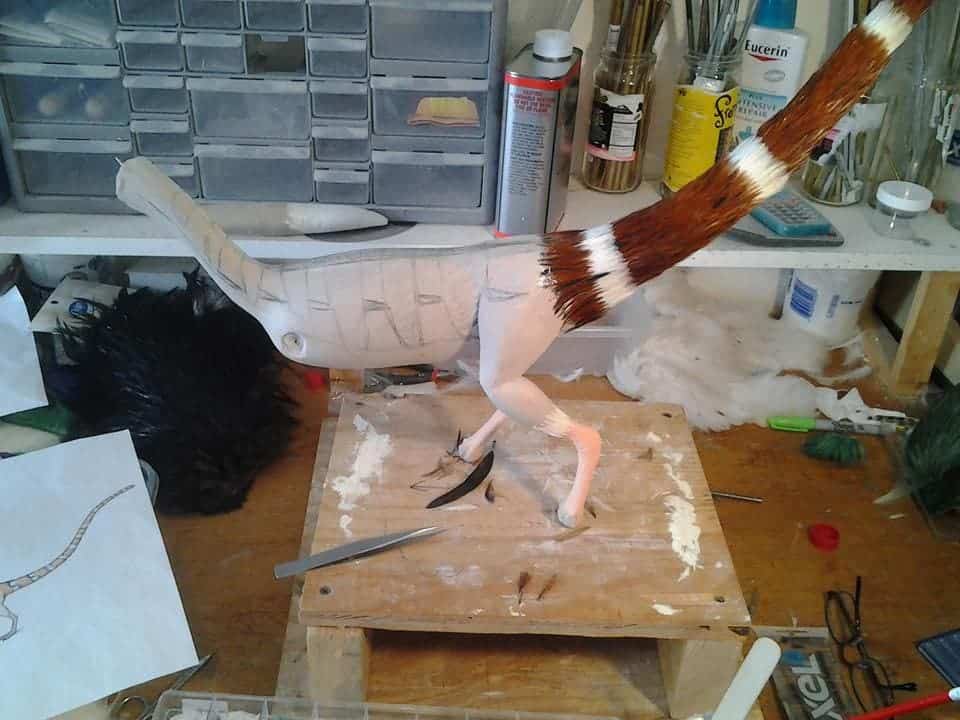 There are countless little “tricks” to doing this. Different feathers behave and need to be used differently. You select each individual feather to go in a specific spot, and you get really upset if you drop or lose the “perfect” one. I make marks and keep the concept drawing close by so I don’t forget what I’m doing with the design. No toes, arms, or head yet. 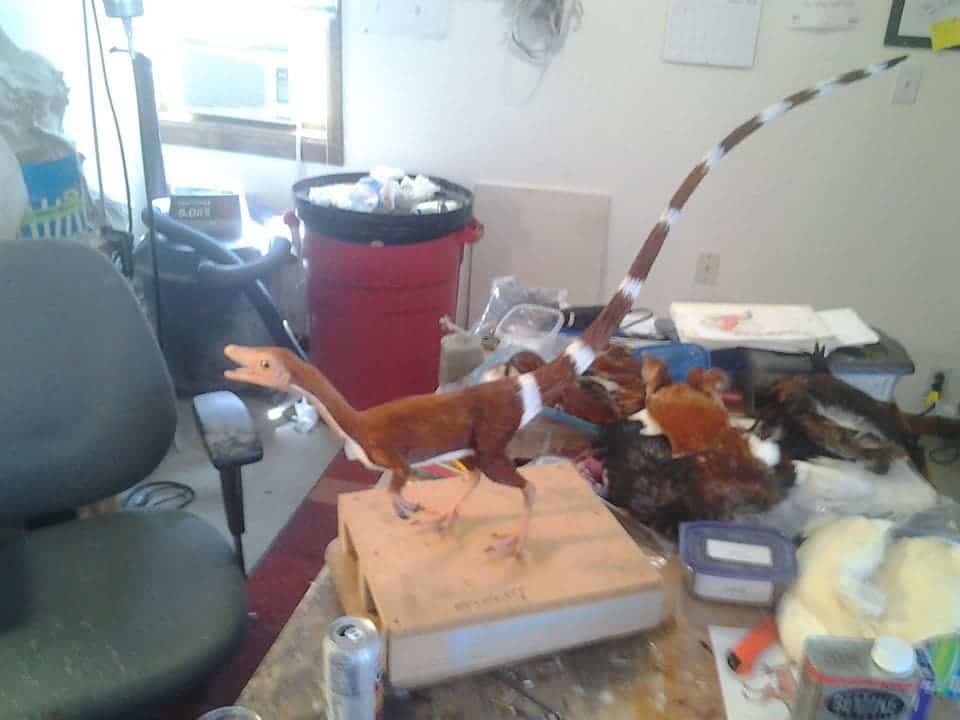 The shop turns into a major disaster area.  There are feathers everywhere; in your clothes, your eyes, your nose, and your food.  There’s no escape.  I once discovered one of those “perfect” feathers that I had lost in my shirt when I went to take a shower.  I brought it back to use the next day.  (You start to go a little insane.)  We made two of these in a row.  This was the first… 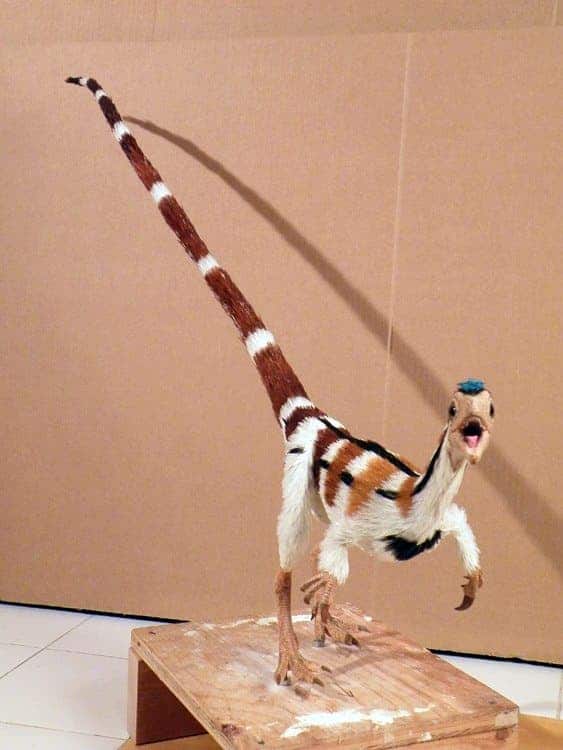 …and this was the second. I think the white body is cuter, but the color scheme the clients picked is a little “busy” for my taste. 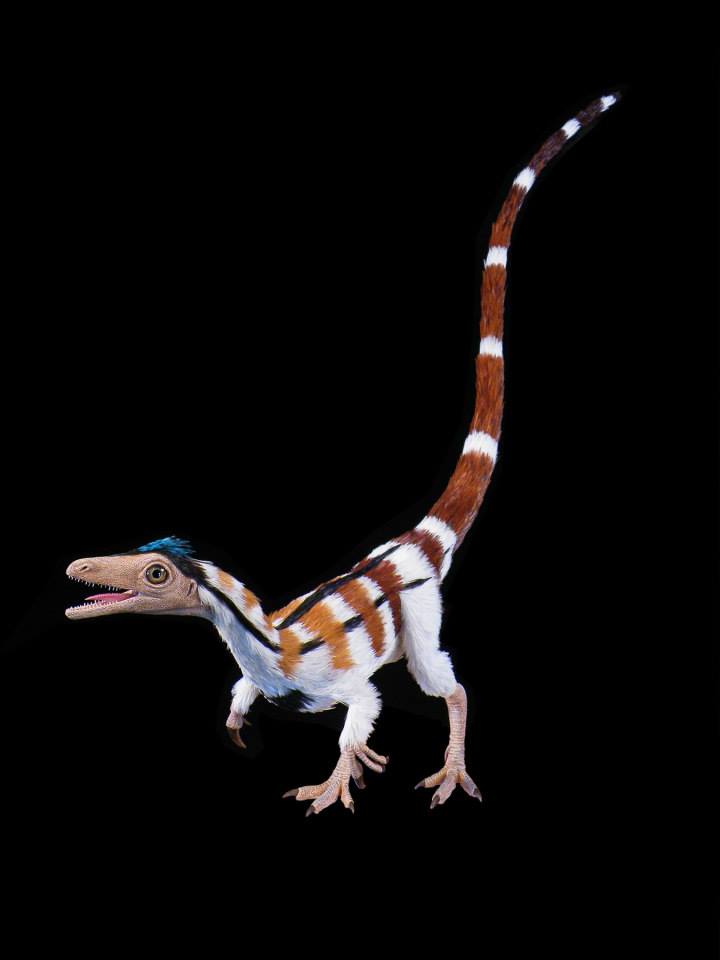 Dinosaurs go “scraw,” not “rawr.” A lot of people don’t know that.

[Sinosauropteryx was the first dinosaur taxon outside of Avialae (birds and their immediate relatives) to be found with evidence of feathers. It was covered with a coat of very simple filament-like feathers. It was quite small, with the largest specimen measuring 1.07 metres (3.5 feet) in length, with an estimated weight of 0.55 kilograms (1.2 pounds). It lived during the early Cretaceous, approximately 124 million years ago]. 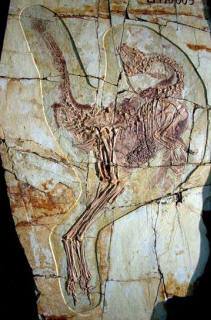 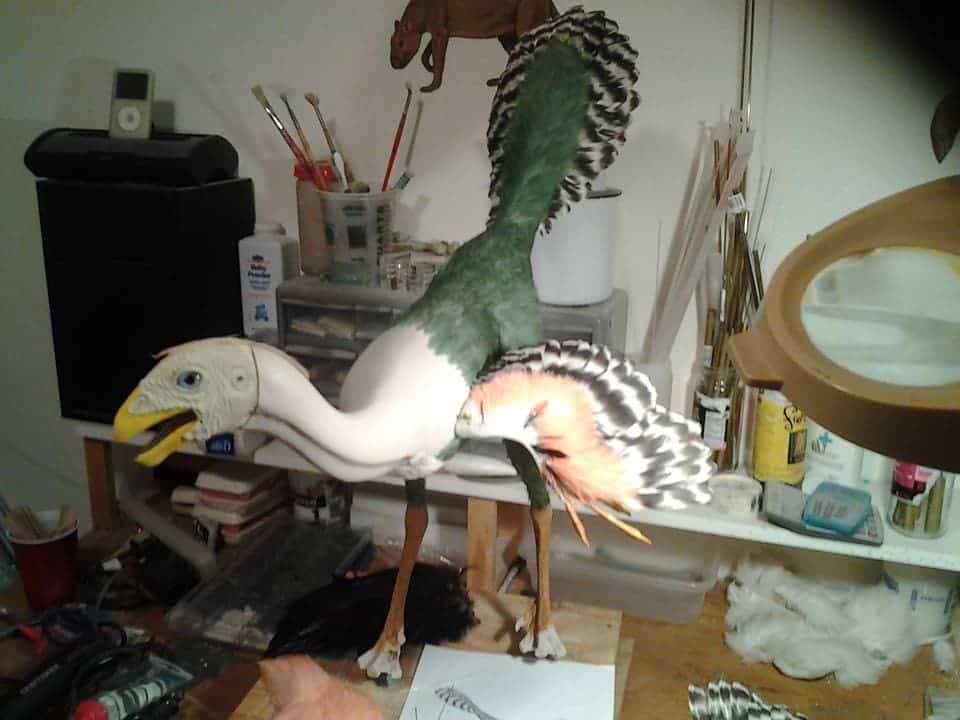 Looking a little raggedy. We were playing with the colors on the beak. I hated that bright yellow. And yes, he’s as soft as he looks. They’re fully pet-able, and it’s actually good for the feathers to touch them. Keeps them oiled and in good shape. 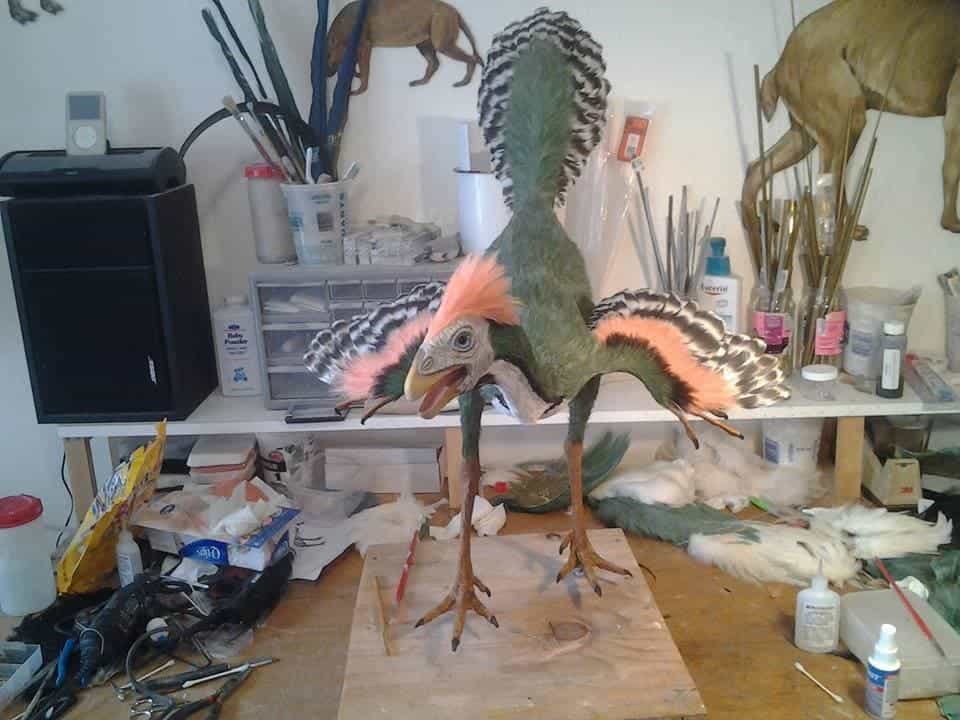 All done, with glam-rock hairdo. 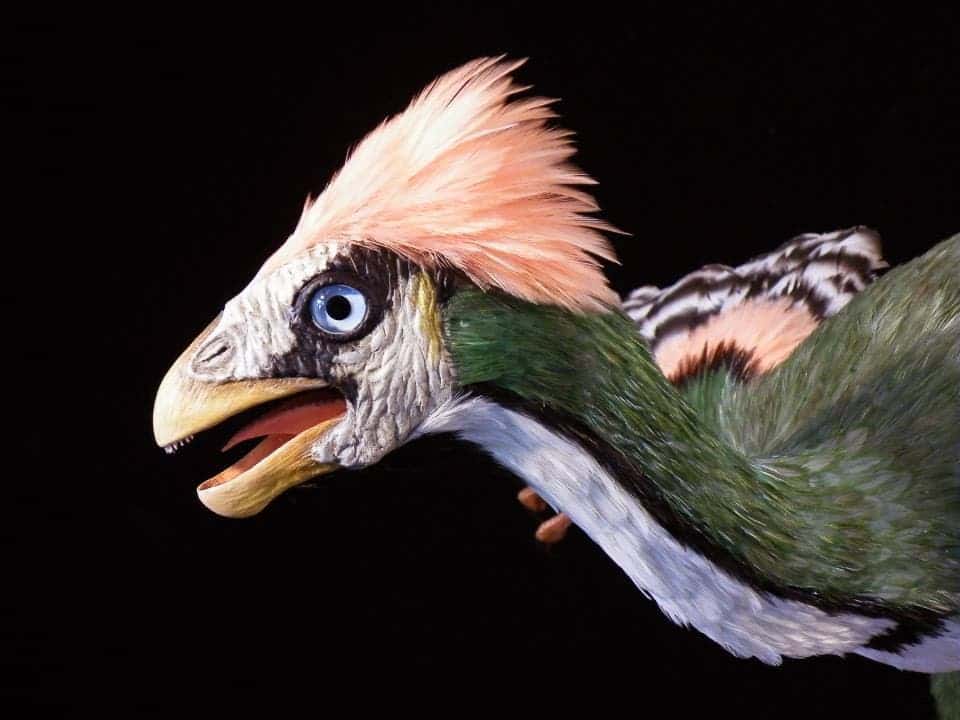 Look at its tongue!

[Caudipteryx also lived some 124 million years ago. They were feathered and remarkably birdlike in their overall appearance, even though they exhibited both bird and dinosaur features.] 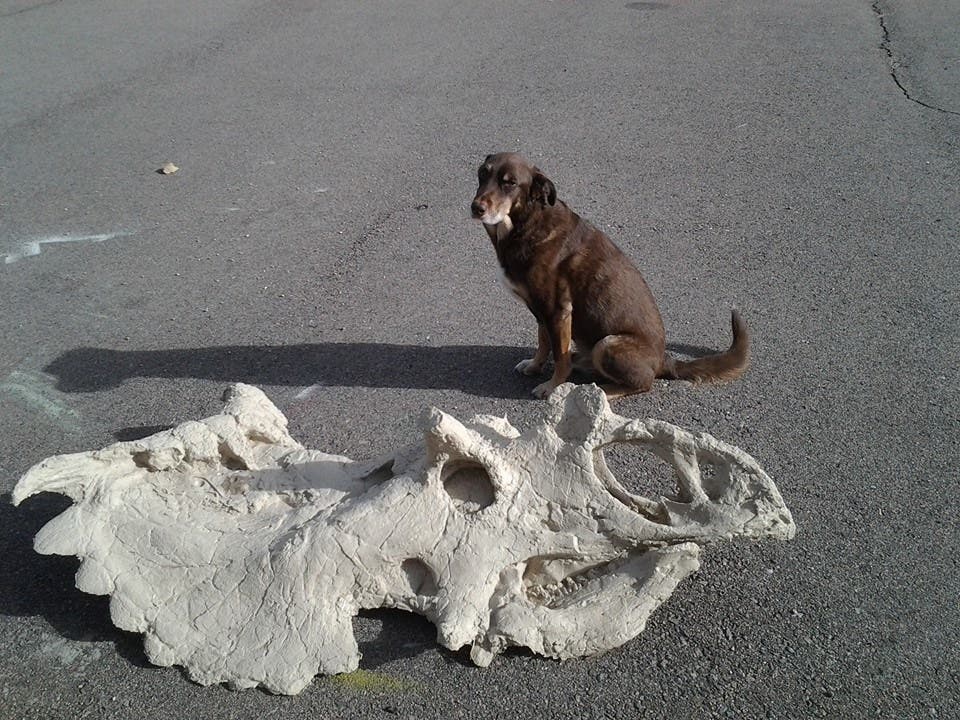 This is Ollie the Wonder Dog giving us critique on a Cosmosaurus cast.

For more information on his shop and work environment, be sure to check out parts 2 and 3 – lots of awesome insight!